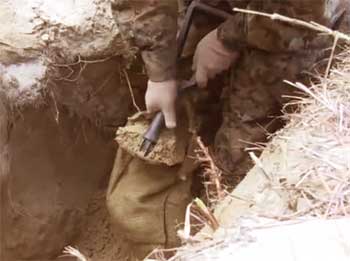 Over 200 years ago, close to a battlefield, a man in civilian clothes rode past a small group of exhausted battle weary soldier.

Those soldiers were digging an important defensive position. Their section leader was shouting orders and threatening them with punishment if work was not completed in an hour.

Man saw that section leader himself was making no effort to help soldiers.


Man asked section leader, “Why are you not helping them?”

Section leader replied, “I am in charge. There men will do as i tell them.”

Section leader was irritated by stranger question, he added, “Help them if you feel so strongly about it.”

To section leader surprise, at that instant, stranger dismounted from his horseback and went to soldiers and helped them until job was finished.

Before leaving that stranger congratulated soldiers for completing their work and then approached section leader.

“You should notify top command next time your rank prevents you from supporting your men and I will provide a more permanent solution.”, said stranger.

After seeing stranger up close, section leader now recognized General Washington and also learned lesson he had just been taught.

Once a saint saw a man with bandage tied around his head. Seeing that saint asked man, “Why have you tied bandage?”

Man replied, “Because my head aches.”

Saint questioned, “How old are you?’

Then saint asked, “Have you been in pain and anguish for greater part of your life?”

Saint remarked, “For thirsty years you have enjoyed good health and you never tied bandage of thankfulness but now because of one night of headache, you tied bandage of complaint..”