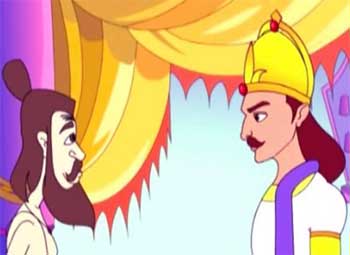 Once upon a time, there was King who was very wise and kind. He had son who was very lazy and didn’t like to do anything.

Even for little things Prince would wait for his attendants to serve him every moment. All day, he would lie on his bed and because of his laziness, he became inactive.

Only eating a lot of food and sleeping made him fat. Boy became so fat that he couldn’t move around for long.

One day, Prince started to feel sick. King got worried called doctors to treat him but nothing could help him to cure Prince’s sickness. King became worried about his only son.


One day, King got to know about Sadhu who came to kingdom a while ago. King went to meet him for his blessings while conversing with each other, King told Sadhu about his son, who was unwell.

Sadhu smiled and told King that his son could be cured. King got happy and asked, “What do i have to do, so that my son can be well.”

Sadhu asked to meet Prince and said to King, “I can only help if prince agree to come and meet me at my hut but there is one condition that he have to come by foot.”

King agreed. Arrangement were made for meet of Prince and Sadhu.

Next day, Prince accompanied by his attendants, after many years, came outside palace. As ordered by King prince had to walk all the way to reach Sadhu’s hut which was on outskirt of kingdom.

When Prince reached Sadhu hut, he was breathless, sweating and uncomfortable. Sadhu noticed this and offered cool water to Prince. He felt better.

Then, Sadhu bought out an iron ball, about size of football and gave it to attendants and asked prince that daily in morning and evening, he had to roll that ball in palace grounds.

Prince returned and from next day, he started to obey Sadhu’s instructions.

After fifteen days, Sadhu came to palace to meet King and Prince. Seeing Prince Sadhu was happy as he had lost an considerable amount of weight.

And because of weight loss, Prince was much more active and all of his sickness had disappeared. After this Prince learned his lesson and didn’t ignored his health because of his laziness and got fit and healthy with time.

Moral:
Health is Wealth. An Unhealthy Person can never Earn Wealth or be Happy in Life.

Motivational Stories for Kids: Working with Others..!