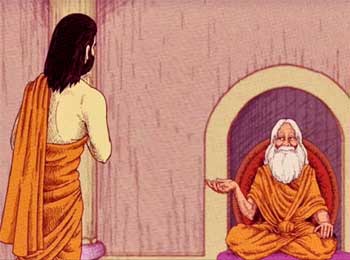 Once upon a time in an ashram, Saint was giving discourse to his disciples, just then a man entered ashram and started abusing Saint. Saint didn’t said anything to that man. After a while that man left.

A disciple who was present there saw this and got angry. He wondered why Saint didn’t respond to that man and listened to him.

After discourse was over, disciple came to Saint and said, “Guru ji please tell how were you able to stay calm and smiling even in such situation? Didn’t it anger you? What’s your secret?”

Saint replied, “Before that there is something that you should know.”


Disciple was confused. He asked, “What is it? Please tell me.”

Saint replied, “You are going to die after one week.”

Disciple was shocked to hear this. He could have ignored this, if someone else had said this but it he couldn’t ignore those words as those came out of mouth of his Guru himself.

After knowing this, disciple got depressed and left from ashram with the blessings of Saint. On the way, disciple was lost in thoughts and was thinking about how to live his life in those seven days.

After thinking a lot, he wanted to make most of those days, So he decided that he will spend remaining seven days following his Guru’s teaching and will live with humility, love and devotion to God.

From that moment his nature changed.

Now, he meet everyone with love and wouldn’t get angry at anyone. He would spend most of his time in meditation and worship of God.

He atoned for his sins, asked for forgiveness from all those people with whom he had estrangement or had hurt. After completing his daily work, he would get absorbed in the remembrance of God.

Six days passed, On seventh day disciple thought i should visit my Guru before death.

So, he went to meet his Guru and said, “Guru ji my time is about to end, please bless me.”

Saint said, “My blessings are always with you. May you live a long and healthy life.”

Disciple was astonished to hear such blessing from his Guru’s mouth.

After blessing him Guru asked, “Tell me how last seven days passed? Were you as angry with people as before?”

With folded hands, disciple replied, “No, No, Not at all. I only had seven days to live. How could i waste it on such nonsense.. I met with everyone with love and also apologized to those whom i had hurt ever.”

At this his Saint smiled and said, “That is the secret of my good behavior. I know i can die anytime, so i treat everyone with love and this is the secret to remain calm in any situation.”

Disciple immediately understood that his Guru’s words were to teach him lesson, His Guru showed him fear of death to give him priceless teachings of life.

You May Also Like: Way to Calm Mind – Buddha Story