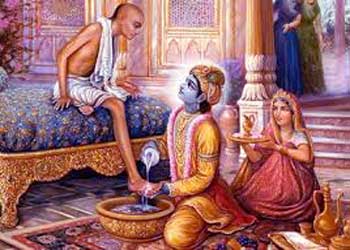 Lord Krishna and Sudama were childhood friends. While Krishna thrived and prospered, Sudama didn’t. He lead a life of poor Brahman, living in small hut with his wife and kids.

Most day, kids wouldn’t even get to eat from what Sudama got as alms. So, one day his wife suggested that he should go to his friend Krishna for help.

Sudama was reluctant to ask for favors but also didn’t want to see his kids suffer. So he agreed. On day of his departure, Sudama wife borrowed some rice from neighbor and gave it to Sudama to take it to his friend as gift.

Sudama took it and set out to Dwaraka, Krishna’s kingdom. He was amazed to see the beautiful city. He reached palace gates where he was obstructed by guards. Sudama was wearing torn dhoti and had poor appearance.


Seeing his appearance guards didn’t allow him to enter palace. Sudama requested them at least to inform Krishna that his friend Sudama has come to meet him.

Guard, although reluctant, goes and informs the Lord. On hearing that Sudama was here, Krishna stopped doing whatever he was doing and ran barefoot to meet his childhood friend.

Krishna hugs Sudama welcomed him to his abode and treats him with utmost love and respect. Sudama felt ashamed to present poor man’s rice gift to Krishna and tires to hide it but all-knowing Krishna asked Sudama for his gift that he brought for him.

Krishna took those rice and ate them with love. Krishna and his friend spend time laughing and talking about their childhood but overwhelmed by the kindness and compassion showed by his friend, Sudama was unable to ask Krishna for help. Sudama returned without asking for any help from his friend Krishna.

But to his surprise when he returned home, he find out that his hut has been replaced by a huge mansion and his wife and kids are dressed in fine clothes.

Sudama realized how lucky he was to have a true friend like Krishna. He didn’t even ask but Krishna knew what Sudama wanted and gave it to him.

Moral:
True friends do not distinguish between rich and poor. They are always there for you when you need them.