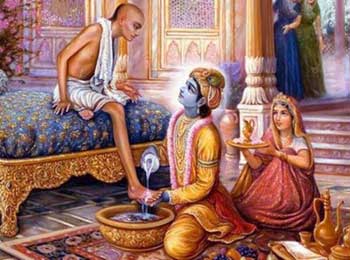 Krishna and Sudama were childhood friends. They meet at ashram of Guru Sandipani for first time. There they became close friends and after few years, both completed their studies and went apart.

After leaving, Krishna became King of Dwarka and married to Rukmani. Where as Sudama led a life of poverty and married a poor Brahman girl. He was not attached to any worldly possessions.

Sudama wife as well didn’t crave for luxuries. Soon, children were born to them. Sudama was poor and sometime, didn’t even had any things to eat for whole day. Children grew older, they would ask for food and cry because of hunger.

Sudama’s wife couldn’t bear to see them going to sleep hungry. She knew that Sudama was friends with Krishna, King of Dwarka. So one day she asked Sudama hesitantly, “Your friend Krishna is rich and powerful. Can’t you go to him and ask for some help?”


Sudama was not comfortable in seeking help from his friend but when his wife insisted for sake of children, he agreed to go and see his friend.

Sudama didn’t had any food in his house. So his wife borrowed two hand full of rice from a neighbor and wrapped it in a clean cloth and gave it to Sudama as Gift for his friend.

When Sudama reached Krishna’s palace, guards didn’t allowed him to enter palace because of his raged clothes. But still when Sudama insisted that at least they can send a message to Krishna that his friends has come to meet him.

Guard informed Krishna. Krishna was overjoyed knowing this and went at palace gate to welcome his friend himself.

Krishna, King of Dwarka welcomed Sudama to his palace with utmost respect and then made him sit on his throne and sat himself near his feet and washed his feet. Krishna’s Wife Rukmani fanned him gently.

Sudama was overwhelmed by the love Krishna has showered on him. Small bag of rice was nothing compared to riches of King to Dwarka, because of this Sudama hesitated to give gift of small bag of rice, to his friend.

But Krishna read his mind and snatched it from his hand. Seeing gift Krishna opened it and was overjoyed to see it and said, “Rice. I love it.” and ate a handful of rice greedily.

Before, Krishna could take a second handful, Rukmani (Being a goddess of wealth, responsible for it’s distribution) stopped him saying,”One mouthful will give him all that he needs.”

Sudama was so overwhelmed by all the love that he didn’t asked for anything or any help. Next morning, Sudama left Dwarka, his heart was full.

Some days, later when he reached his place, he approached his house and instead of his hut, he saw a grand mansion. He searched for his wife and children, just then his wife came out of grand mansion wearing jewels and finest clothes.

She told Sudama, “Look at Krishna’s might, we have been rid of our poverty. Krishna has ended all our miseries.” Just then Sudama understood that his friend gave him everything without even asking.

Sudama recollected Krishna’s pure love & his eyes welled up with tears of joy.

Moral:
True Friendship doesn’t distinguish between High and Low status or between Riches and Poverty.

You May Also Like: Three Toys – Trust and Friendship