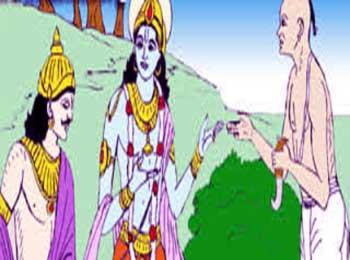 Once upon a time, Krishna and Arjun went out for stroll. On their way they saw a poor priest begging for alms. Arjun felt pity for him and gave him a bag full of Gold coins.

Priest thanked Arjun and started to walk back his home. On his way he saw a needy person but ignored him as he wanted to reach home as soon as possible with those gold coins.

Priest became dejected and again went back to begging. Next day when Arjun saw priest again begging, he called him and asked reason.


Priest told him about whole incident. Arjun again felt pity and gave him a diamond ring this time. Priest became happy and went toward his home. This time also he saw a needy person his way and ignored him.

On reaching home, Priest saw that his wife was sleeping. He went to kitchen and put that ring into an empty pot and went to sleep. Later his wife wake up and took pot with her to bring water from river. As soon as she put pot in river to fill it up, diamond ring was gone with water flow.

When priest wake up, he went to bring ring from pot but to his surprise there was water in pot but no ring. When he asked it to his wife. She told him that she had not noticed it and it must have been lost in the river.

Again Arjun saw that priest and was surprised to see him begging again. Arjun inquired about it and felt bad for priest and started to think if he will ever be able to live happy life.

Just then Shri Krishna smiled and gave that priest just one copper coin which was not even enough for buying a lunch.

Arjun said, “Lord, i gave him gold coins and diamonds and yet it didn’t help him. How will just one copper coin will help this poor priest?”

Shri Krishna smiled and told Arjun that he should wait and see.

On his way back to home, Priest thought that one coin isn’t enough to buy even a proper food and just then he saw a fisherman who was taking fish to sell in market.

When priest saw him he thought to himself, “This coin can’t solve my problem. Why not save life of a fish.”

Priest when to fisherman and bought a fish from him with that coin. He took that fish and kept it in his small pot which he used to always carry with him.

The fish was struggling in a small pot of water, ended up throwing out a diamond from the mouth.. Just when Priest reached river to drop back fish in river, he saw diamond in his pot.

Arjun saw all this and said, “Oh Lord, Now I understand your play.”

Moral:
When you have enough to Help Others, Don’t let that Chance go. Your Good Deeds will always be Repaid to you.