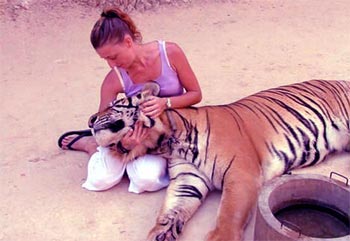 Once upon a time lived a couple on country side. Husband was very loving soulmate before he left for wars but ever since he returned he became very angry and unpredictable. His nature became so scary that his wife was scared to live with her.

There was Hermit who used to live there and people would go to him to find solution for their problem. Wife went to hermit for advice. As she approached Hermit, he said, “What’s your problem??”

Wife explained the situation. Hermit replied, “Hmm.. It’s often when soldiers return from the war. What do you want me to do??”

Wife replied instantly, “Make me a portion.. or a drink.. whatever it takes to get my husband the way he used to be before going to war..”


Hermit replied, “Young woman, your request is unusual. I need some time to think and look if there is any solution. Come back tomorrow.”

Next day in morning Wife went back to Hermit’s place.

Hermit greeted her with a smile and said, “Young woman there is a good news for you.. There is a portion which can turn back your husband to normal but that potion require an unusual ingredient. You must bring me a whisker from a live tiger.”

She with shocked reaction replied, “What..!! It’s impossible..”

Hermit replied, “I cannot make potion without it. There is not other solution. You must now leave as there is nothing more to say..”

Wife went home. She wanted her husband back the way he used to be. So, all night she was thinking about way to get tiger’s whisker.

She had heard about a tiger leaving in cave just outside their city. Next day before dawn she got up prepared a bowl of rice with meat sauce on the top. She took that bowl and went to the tiger’s cave on mountain side.

She was scared to go anywhere near the cave but still took that bowl and silently placed it in front of cave and then carefully backed down.

Next day again she went there with a rice of bowl with meat sauce on the top. When she reached there, she saw empty bowl. She replaced that empty bowl with filled one and tried to leave silently as she didn’t wanted to attract the wild beast attention.

This went on for months yet she never saw tiger but from the footprints she could guess that animal eating all the food must be tiger.

One day as she approached, she noticed tiger’s head poking out of cave. Very carefully she set down the fresh rice bowl on the same spot replacing empty one and stepped back.

After few weeks she noticed that tiger would come out of cave, when she came to replace empty rice bowl with fresh one. She stayed away from tiger but in her heart she knew that one day she have to come closer to get it’s whisker.

Another month went by and now tiger would sat beside empty bowl waiting for her to come. As she looked at tiger carefully, she felt it’s rather friendly creature. Not a week later, tiger allowed her to gently rub it’s head and as she rubbed it’s head, tiger would purr and stretch like a house cat.

She went back home and that night she knew that time had come. Next morning she brought a knife and also took a fresh bowl of rice to tiger’s cave. She placed the rice bowl and said to tiger, “May i please have just one of your whiskers??”

Tiger nodded and while petting its head, she carved whisker off tiger’s head. She thanked tiger and left.

Next day she went to hermit’s hut with the precious whisker in her fist. She said, “I have the whisker.. Live tiger’s whisker you needed for making potion..”

Hermit checked the whisker, it was indeed tiger’s whisker. “Tell me.. how did you do it??”, said hermit.

Kim told him about the story that how she earned tiger’s trust and when she requested, tiger permitted her to cut off one off it’s whisker.

After listening to Kim story, hermit took the whisker and flicked it into fire and said, “Kim.. you no longer need the whisker.. Tell me, what’s more vicious.. A tiger or a man?? If a dangerous wild beat respond to you gradual patient care.. don’t you think a man will respond??”

Kim stood speechless and then returned to her.. Now she knew what she could do to get her husband back.

Moral:
With Patience, Love and Care you can Won anyone’s heart.

You May Also Like: Two Brothers and Goblin Story