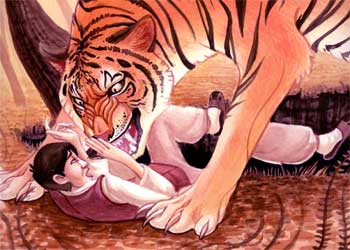 Once a village was attacked by a fearsome tiger. Attacks became so regular that villagers were scared to go out even in daytime.

So, one day all village elders get together to think of solution. After discussion they decided that they would set out traps all around village. They dug deep holes and filled each whole with lots of meat and then covered them up with branches and leaves.

Next morning, when villagers came out they found that tiger was trapped in one of those hole. They decided to leave it there to die.

Two days later, a young man had come from city and as he was going to enter village, he heard a sound. When he approached that sound, he saw tiger at bottom of pit.


Seeing that young man, tiger made a pity face and said, “Please help me get out of here. I am trapped here and will die if you don’t help me. If you help me will be in your debt forever..”

Young man replied, “But you are tiger, If i let you out then promise that you will not eat me..”

Tiger wanted to get out of that hole and said, “I promise you.. I will not eat you ever..”

Young man felt pity for that tiger and took a long branch from near by, then lowered it into the hole. With help of that branch tiger hauled himself up.

After getting out of that hole, tiger took a sigh of relief and then licked his lips saying, “Well.. Thank you.. You little snack.. ”

Young man was scared to hear that and said, “But you said that you won’t eat me..”

Tiger replied, “I am hungry and you shouldn’t have trusted me..”

As tiger was about to pounce on that young man, he yelled, “Wait…!! Let’s ask that cow over there if you should keep your promise or not..”

Tiger was happy to get out of hole and thought it would be fun to play with it’s food for little while, so he agreed.

When young man saw a little rabbit near by and explained his situation, little rabbit replied, “Before i make decision.. I need to see exactly what happened.”

They went near that deep pit again. Seeing things happening slow, tiger got impatient and want to eat that young man quickly.. So he leapt into hole and said, “He was coming from that side and i was stuck here.. See..”

Just then tiger realized that it was stuck again in that hole and started roaring with rage..

Seeing this little rabbit quickly told that young man to go on his way and think twice before rescuing another hungry tiger..

Moral:
You should be Careful about whom you Help.