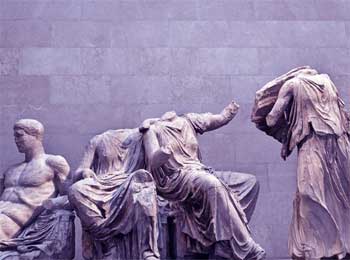 Once there was King who loved sculptures very much. He used to collect sculptures from around the world and bring them to his palace. There were many sculptures in his palace but among them all, he loved three sculptures the most.

Everyone knew that King had great affection for those sculptures. One day when servant was cleaning sculptures, he accidentally broke one of his favorite sculpture.

When King came to know about it, he got very angry and immediately gave death sentence to servant.

After hearing the sentence, servant immediately broke the other two sculptures which King liked the most. Everyone was surprised to see this.


King asked his soldiers to bring servant to his court.

When servant came, King asked, “Why did you broke other two sculptures?”

Servant said, “My Lord, These Sculptures were made of clay and are very fragile. They have not come with boon of immorality. If not today, tomorrow they would have broken.

If it had been broken by someone like me, then he would also have to face death penalty without any reason. I already got the death penalty, so i saved the lives of two person by breaking other two sculptures.”

Hearing this, King realized his mistake and freed the servant from punishment.

Servant taught King the value of Life. The King loved sculptures but it was against justice for him to give death sentence to the servant. Sitting on the chair of justice, one should give a decision fairly, not getting affected by his personal feelings.

The King understood that servant was many times better than him, it was this servant who despite being so close to death, thought of goodness..!!

Personal on high post has responsibility and because of his personal love, giving the death penalty for a small crime is an insult to that seat. Whether it is a king or whoever is chosen to do justice should understand the importance of justice.

You May Also Like: Man Searching Touchstone – Habits in Life!