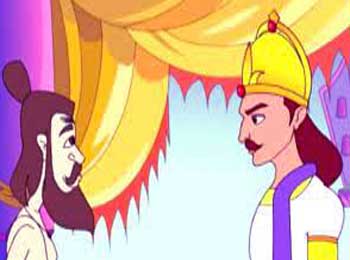 Once there was a thief who heard that King has made announcement and invited all Sanyasi, sadhu from his kingdom, to his palace for a meeting.

Thief thought, “May be King will be giving alms to those Sanyasi and Sadhu. If i go there, i can rob others when they leave palace.”

On decided day, thief entered palace and hid near by, waiting for meet to start.

When all Sadhus and Sanyasis gathered, King came out onto his balcony and spoke, “O great beings. I have invited all you here because i have request to make.


I have a daughter and she is inclined to marry a saintly person. I will give half of my Kingdom to one who would be marrying my daughter.”

Listening this, thief thought what if he disguise as a saintly person, if he could marry princess then he would never have to rob anyone again and live an easy life.

As soon as King said this, 20 people from front row got up and left without saying anything.

Those were Sanyasis who came because they thought King had invited them for spiritual meeting, so may be there is opportunity to learn and share knowledge but when they heard King’s proposal they all left.

Seeing this King said, “Look, i will give 75% of my Kingdom to one who would marry my daughter. I will only keep a little part for myself. ”

We came here in order to respect your meeting but since it about marriage proposal please give us permission to leave.”

One by one all the saintly persons who were present there, refused King’s riches saying that their purpose of life is fulfilled constantly by engaging their mind on lotus feet of Supreme Lord. So they don’t need Kingdom nor princess.”

Now, there was only one person left, it was thief who was disguised as Saint.

Just then Man interrupted, “You are wrong.”

King was surprised and questioned, “What? To address you as saintly person is wrong?”

At this man said, “Yes, because i am a robber not a saintly person. I came here thinking of robbing people who came here but now, i understand that if your Kingdom and country has any value, why would all these people leave?

** The Hearts of Saintly people are non-different from holy-dhams as both are special abodes where the Supreme Lord Loves to Stay.

Saintly people are equi-poised, friendly to all living entities, merciful, tolerant. They are Aware of the Truth that all the Riches in this world are temporary and they don’t Hanker for Wealth.

They lead a Simple, straight forward life, engaging their body, mind and soul completely in service of Supreme Lord.

Learning:
We should always try to be in company of good people, people who are Saintly and remembers God’s Name, because we never know when it Purifies out heart and we are able to see real truth of life.

You May Also Like: How Much Time Will it Take to Reach? Saint Answer