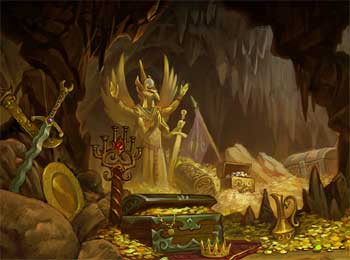 Once there was King who was very cruel and has collected a lot of wealth by wrong means and imposing unnecessary taxes on his people.

King had hidden his treasure in a cave which was deep inside forest, in a secluded place. At the entry of cave there was a lock system. Only King and one of his minister knew how to open that lock and enter cave.

Apart from these two, no one knew about the secret of treasure. Usually King would go to see his treasure with his minister.

One day, without informing anyone, King alone went into forest to see his treasure. He opened the door of treasury and entered. He was relieved by the radiance of treasure.


At same time, minister also came out to the area and saw that door of treasury was open. He was surprised to see that and thought that he might have left door of treasury open, when he came to put some treasure in cave last night.

So, he hurried to the treasury and locked the door and left. Meanwhile King was busy looking at his treasure.

After looking at the treasure when King was satisfied, he came to door and to his surprise door was locked from outside. That door couldn’t be opened from inside. King knew that and started banging door loudly but there was no one in that secluded place in forest to hear his voice.

King kept shouting but no one came. He kept looking at the treasure exhausted. After sometime, King felt hungry and thirsty. He was going mad because of hunger and thirst.

He went over to the box of treasure and said, “Please give me a glass of water..”

Then he went over to gold and silver jewelry and said, “O pearls, silver and gold treasure, please give me a meal.”

At that time King felt that all that treasure were telling that – All your life you went after money and treasure but all this earning can not give you even a glass of water or food for one time when you need it most.

When King came to his senses, scattered all the pearls and diamonds around and made a bed out of it and laid down on it.

He wanted to give a message to the world but didn’t have paper and pen. So, King broke one of his finger with stone and wrote message on the wall.

Meanwhile, Ministers and whole army were looking all over for missing King but King was not found for long time.

Then one day, minister came to see King’s treasury, there he saw King lying on bed of jewels and insects were eating his corpse.

Then he saw message on wall written with blood – All this Treasure and Wealth couldn’t give me a Sip of Water and a Morsel of food.


Learning:
At last Moment, Only Wealth of your Deed will go with you, no matter how much money you collect, everything will be left here. This is why Life which God had Given you as a Gift, should be lived doing Good Deeds for others.

You May Also Like: Magic Crystal Ball – Story about Greediness

Search Keywords: King Who Loved Only Money – When One Dies Short Story, Story Teaching a Lesson about True Wealth of Life, Always Do Good Deed Moral Story, Never Do Wrong Story, Everything will Be Left here When You Die Learning Story for Life, Story for Those who Think About Accumulating Money Only