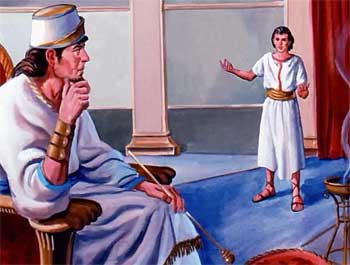 Long ago there was a King who had kept ten wild dogs. Any server not matter how long that server worked for King, just at one mistake, server would be punished.

Servant at fault would be thrown in front of those wild dogs as punishment. Dogs would attack and torture them and sometimes would even eat them alive.

Once, one of the servant gave a bad opinion which King didn’t like at all. So, he ordered that servant should be thrown in front of those wild dogs.

Servant said to King, “I served you for ten years but today i did a small mistake and i get this. Before leaving i have one last request.”

Just after this, servant went to guard who took care of dogs and asked him, “I would like to serve dogs for next ten days. Please allow me.”

Guard was baffled but still agreed.

Everyday, servant dedicated all his day, to feed, to clean, to wash all those wild dogs. He would comfort them and took utmost care for them in those ten days.

When ten days ended, King ordered servant to be thrown in front of dogs for his punishment.

When dogs were released, everyone was surprised to see that those voracious wild dogs were not attacking him but were licking him, playing with him.

King was baffled by what he was seeing and said, “What happened to my dogs?”

At this servant replied, “I served dogs for only ten days and they didn’t forgot my service. However i served you for ten years and yet at my first mistake, you forgot everything and ordered to throw me in front of wild dogs to be eaten alive.”

King realized his mistake and ordered servant to be released. From that day on wards King stopped giving such punishment to his servers.

Moral:
People tend to Forget good things, a Person did for them as soon as that person makes a Mistake towards them. One should not Throw out the history that is filled with Good, quality action just because of one mistake that hurt you.