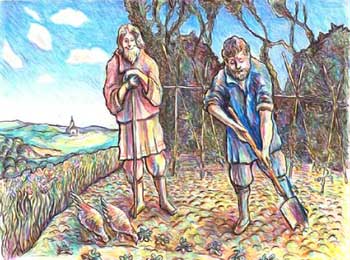 Once in a kingdom, lived a hermit in forest. Hermit was famous for his wisdom and people would come to him for help.

One day, King dressed in simple clothes went to forest, to meet hermit.

When King reached at hermit’s place, he saw that hermit was digging a hole in front of his hut. When King came to him, hermit greeted him and returned to his work.

Hermit was thin and frail and each time he thrust shovel into ground and turned a little clod of earth, he breathed heavily.


King approached him and said, “I came here to seek your help. I have three questions.. Can you please tell me answers to these..”

King continued and asked, “First What time need to remember and not to miss, so not to regret later..?

Second, Which people are most important and need to deal with and which are not?

Third, What are the most important pursuits and which one therefore, has to be taken before others?”

Hermit listened to King but didn’t answer and continued digging.

Seeing him King said, “Give me shovel. I will do rest of digging..”

Hermit handed him shovel and sat down on ground.

After digging for an hour, King stopped and repeated his questions. Hermit didn’t answer and said, “Now you rest.. I will dig.”

But King didn’t gave him shovel and kept on digging. Just then they heard someone coming toward them running.

When they looked around, they saw a man running out of forest toward them with his hands pressed to his stomach and blood flowing from between his fingers.

Man ran up to King and fell fainting on ground. When hermit and King checked him, they saw a large wound on his stomach.

King immediately started treating that man’s wound. After much effort, King was able to stop blood flowing from his wound. Later, man gained consciousness and asked for water. King immediately went to river and brought fresh water for him.

Meanwhile, sun had set. King and hermit carried that wounded man inside hut and laid him on bed. King was so tried from all work that, he lay down to rest and fell asleep.

In morning when King woke up, he looked for wounded man.

When King went up to him to check his wound, he said, “Please forgive me..”

“I do not know you and have nothing to forgive you,” replied the king.

Wounded man replied, “You don’t know me. I am your enemy and I swore to take vengeance on you.. I had been keeping eye on you for long..

I knew you had come alone to see the hermit and I resolved to kill you on your way back. But when the whole day passed and you did not return. I left my ambush to seek you out and came upon your knights instead.

They recognized me and wounded me. I escaped from them but I should have bled to death if you had not cared for my wound. I intended to kill you and you have saved my life. Now, if I live and if you wish it, I will serve you.. Please forgive me.”

Hearing this, King reconciled with his enemy and then went back to hermit and said, “Wise man, Please answer my questions.”

“But you have already been answered,” said the Hermit.

“How have I been answered?” asked the King.

Hermit smiled and replied, “If you had not have mercy of my weakness yesterday, have you not dug these beds for me and if you would instead go back alone, that fellow would have attacked you and you would have regretted that you did not stay with me.

The most important person is with whom you are now, for no one can know whether or not he will ever have a deal with any other person

The most important pursuit is to do good to him, since it is for that purpose alone that man is sent into this life.”

You May Also Like: Ways to Make Life Better