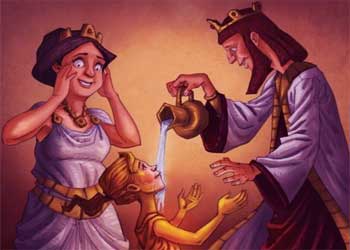 In ancient Greek, there was a King named Midas. He had a loving wife and daughter. He had lots of money and everything he needed but still he was not satisfied with what he had. He wanted to have more and more riches.

One day, Midas saw that a satyr named Silenus was drunk and passed out in his garden. Midas knew that satyrs always bring good luck so he bought him in and let him rest in his palace.

Silenus is friend of Dionysus (God of whine and celebration). When Dionysus got to know about Midas kindness toward his friend Silenus, he decided to reward him.

He asked Midas to wish for something. Midas had everything but yet he wanted more riches. So, he said, “I wish everything i touch turns to gold.”


Although Dionysus knew it was not a great idea but still he granted his wish and left.

Midas touched a thing near by and it immediately turned into gold. Midas was happy that his wish was granted. He went around his palace touching random things and turning them all of those things into gold.

After sometime, he got hungry and took an apple to eat but to his surprise before he could bite, apple turned into shiny gold apple. After that he tried to eat other things but everything he touched turned into gold.

Midas loved his daughter more than anything in this world.

Aghast, Midas ran back to the garden and called for Dionysus. He begged him to take away his powers.

Midas begged Dionysus to save his daughter, Dionysus felt pity for him and told him that if he got to near by river barefoot and bring pot filled with water back 100 times and pour it on his daughter only then his daughter could be saved and everything could be turn back to normal.

Midas did same and saved his daughter. Midas learned his lesson and lived rest of his live contended with what he had.

Moral:
Do not get Greedy. Be Happy and Content with What you have.

You May Also Like: Magic Crystal Ball.. (Villager’s Wishes)