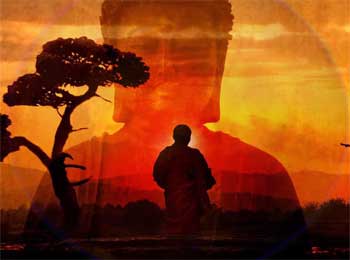 Once there was King who used to go on round of his Kingdom in disguise. Every night he would go to see whether things were alright or there was some trouble about which he didn’t know.

He saw a very beautiful and silent man standing under a tree. Whatever time of night he went, that naked man was always standing there silently, just like a statue.

King got curious and finally one day he asked, “What are you guarding? I can’t see anything”

Young man laughed, “I am guarding myself. I don’t have anything else. Guarding itself, being alert and aware is greatest treasure. You have much but you don’t have the guard.”


King was puzzled but was intrigued by that man. Slowly, a great friendship arose.

One day King said, “I have been asking you so many questions but you never even asked me – who you are?”

Nothing can be predicted. Everything goes on moving into more and more mysteries and I am perfectly at ease. Whatever is happening is a joy. Each moment is so sweet and so fragrant, I cannot ask for more. I don’t know any other way to relate with existence.”

King replied, “But i have fallen in so much love with you that i wait whole day for night to come and i go on my round.

I am always afraid some day, you may not be here. I want you to be closer to me. Can i invite you to my palace? I will arrange everything as you want.”

Without even a single moment of hesitation, man said, “This is good idea.I can just go with you right now. I don’t have anything to carry with me, no arrangements have to be made.”

King was shocked. As he was expecting young man to refuse that offer, because he looked like he has renounced the world.

Doubt arose in King’s mind that perhaps he has been be-fooled and this man is not saint and he has only be pretending and been waiting fr this moment.

Now, it was difficult for King to take invitation back. Sadly, he took man to palace and gave him best place in palace to stay and also best services were provided.

King was still hoping that young man would refuse but young man said, “Great! This is the right place.”

King couldn’t sleep at whole night. From next day, young man was eating luxurious food, was no longer naked, he was using costliest robes. He was not looking worried about woman as most beautiful women from palace were serving him.

Young man was quite at ease, as if nothing had happened but it was too much for King. It was becoming a wound in King’s heart thinking that he had really been be-fooled and cheated.

King started to think of ways to get rid of young man. King went to young man and said, “I have been wanting to ask you a question for sometime.”

Young man replied, “I know – not from sometime but from the moment i accepted your invitation.”

King was shocked and said, “What do you mean?”

Young man replied, “I know you were expecting me to reject your offer. If i had refused then you would have respected me, touched my feet but i don’t reject anything.

My acceptance is total. Weather it’s palace or place under tree. Now, you can ask me question, although i already know it.”

King said, “Then answer me. All i want to know is, what is difference between you and me?”

Next morning they both went on horses for morning ride. They rode long way but young man still hadn’t talk about answer.

Finally, King said, “Now this river is the boundary of my empire. Beyond the river I cannot go. That belongs to someone with whom we have been enemies for centuries. We have ridden miles and now it is time enough. It is getting hot, the middle of the day.”

Then getting off his horse, young man took off the robe and said, “I am going to the other side of the river because I don’t have any enemies. This robe was never mine, and this horse was never mine. Just one small question: Are you coming with me or not?”

King said, “How can i come with you? I have to look after kingdom. My whole life’s work, struggle, fight, ambition is behind me in the kingdom.”

King realized that he was mistaken, young man was not deceiving him and was man to realization.

King got on his knees and said, “I beg your pardon. I touch your feet. Don’t go. Otherwise, i will never be able to forgive myself.”

Young man smiled and said, “To me there is no problem. I can come back but you will still start doubting, so it is better that you let me go.

I will be just standing by the other side of the bank under that beautiful tree. Whenever you want to come you can come at least to the other shore and see me.

I have no problem in coming back but I am not coming back because I don’t want to disturb your nights and days, and create tensions and worries.”

The more he became reluctant, the more the King started feeling sorry and sad, guilty about what he had done.

Young monk said, “You could not understand me because you don’t understand the experience of suchness: wherever you are, you are in a deep love relationship with everything that is.