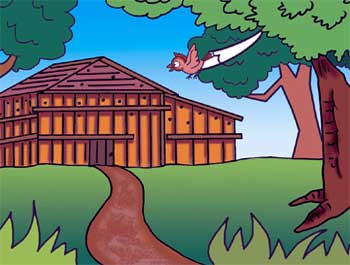 Once upon a time, there was a King who was fond of stories. Many story tellers used to come to his court and tell him many stories. He would reward them with gold and gifts.

One day, King asked his minister that next story teller must tell him a long story – a never ending story and if story ends, then story teller will have to pay with his life.

Now, Many days passed but no story teller came to court to tell stories as they were afraid to lose their life.


King grew desperate, he wanted to listen to new stories. He made new announcement that next story teller will get hugh reward.

A few days later, a traveler arrived at King’s court and said that he would entertain King with a story.

Minister asked traveler, “Do you know what fate awaits you if story ends?”

Man nodded and said, “Yes, Respected minister. I know and i am still willing to tell story to King.”

So, the story session begin.

Traveler started story, “Once lived a great King, ruling over a vast kingdom. He built a big granary to store grains grown in his land. Soon, granary was full.

Mason who built granary, had made tiny openings fir air and sunlight to pass through.

One day, a tiny sparrow noticed opening and came flying through that opening and picked up one little grain and flew out. It dropped grain in it’s nest and came back.

Then flew back into granary through hole, picked up a grain, flew out and dropped grain in it’s nest.”

King was getting impatient and asked, “What happened next?”

Traveler continued, “You will not believe what happened next. Sparrow flew back to granary and picked up a grain and flew back to nest and dropped it there.”

Traveler said, “And then, sparrow flew back to granary and picked up grain..”

Before he could finish, King yelled, “No.”

By that time, King was sick of sparrow, granary, grains and above all, the story teller.

“I will tell you what happened next. “, said King sternly.

King said, “King ordered the mason to close the openings. When opening was closed, bird as back, looking for grains..”

King was tongue tied. He had send away, traveler with hugh cash reward.