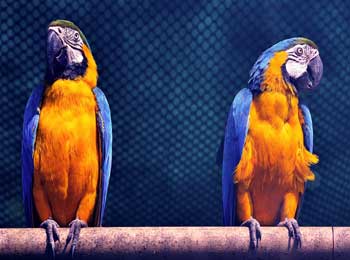 Once a King was going alone in the forest, riding on a horse. When he was passing by a hut, there he saw a parrot in the cage.

On seeing King, parrot cried out, “Run.. Catch it.. Kill it… Snatch it’s horse… Take away his jewels.”

King understood that he had come to bandit’s colony. Knowing that, King made his horse run with full speed. On hearing parrot voice bandits came out and started to chase King.

Bandit’s followed but King’s horse ran so fast, that bandits had to give up chase.

King came across another hut. There he saw another parrot sitting in front of cage.

Just at that time, King realized that he had come to the ashram of Saints and sages. On hearing Parrots voice, sage came out immediately and welcomed King.

King, accepted hospitality of sages. Later, he went to sage and told everything that happened previously and asked, “Maharaj! Why there is such a difference in nature of birds of same species?”

Even before sage could say anything, parrot said,”King.. We are both child of same parents but at early age, we both got separated. He was taken away by a bandit and i was bought here by a sage.

Whole day, he listens to the words of violent bandits and i listen to words of sage, their discourse about God. That’s reason we both grew up to be so different.”

Learning:
As the child grows, his parents, surrounding environment and friends Influence his life. That is Why parents should pay attention to Inculcate Good values ​​in their children and keep children away from Bad company.

You May Also Like: Jungle School Result – Kids Ability Test!

Search Keywords: King and Two Parrots – Reason for Being Different, Story for Parents, Affect of Good vs Bad Company Short Story with Moral Lesson, Story to Learn about Influence of Company on One’s Nature, Moral Story for Kids, Be Careful about Association Short Story for Parents and Children