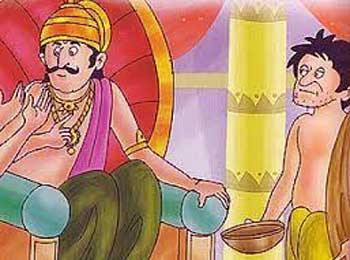 A King, whenever went to temple, would see two beggars sitting at temple entrance. One beggar used to sit on left and other on right side.

Seeing King, beggar on right would say, “O God, you have given a lot to the King, give it to me too!”

Where as Beggar on left would say, “O King, God has given you so much, give me something too.”

One day, while King was passing by beggar on right side said to other, “Brother, demand from God, he is the one who listens.”


At this left side beggar asked him to stop saying such nonsense.

Listening to this, when King reached palace, he called his minister and said to him, “Beggar who sits on right side of temple always asks God for help, then God will surely listen to him.

But the one who sits on left always pleads with me so do this, Therefore i want to give something to him.”

Then he ordered minister, “Take large pot and fill it bottom with gold coins and fill rest of pot with rice pudding and give that pot to beggar who sits on left, one who always ask me.”

Minister did the same.

When beggar got that pot filled with rice pudding, he started eating it with fun, while gazing at other beggar and said to him, “You always said God will give. But see today i got this because i asked the King. Do you understand now?”

After a while when beggar was full, he gave the pot with remaining pudding to the beggar on right side saying, “Take it, you too eat. You fool.”

Next day, When King came to temple, he saw that left side beggar was still sitting there while the one who used to sit on right was missing.

King was shocked and asked him. “Didn’t you got a pot full of rice pudding?”

Beggar replied, “Yes, i got that my Lord. It was very tasty. I ate very well.”

King asked, “What did you do with the pot after that?”

Beggar replied, “When my stomach was full, i gave the pot to other beggar who sits here because that idiot would always say that God will provide. So i told him about King’s mercy and gave him the rest.”

King understood everything and smiled and thought, “Of course, God has given it to him.”

You May Also Like: God’s Work! (Must Read) – Helping Others