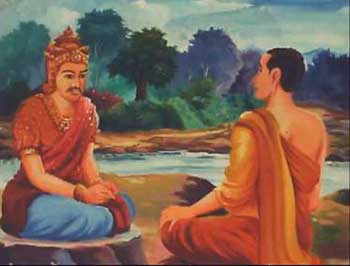 Once there was a king who got badly hurt in a battle. No doctor was able to treat his wound well.

After some day, a sage was visiting that kingdom. King got to know about him and invited him to his palace.

Sage went to palace and King was completely healed by Sage’s touch. King thanked Sage and wanted to present him gift in return but Sage refused.

After this Sage left. Months passed by.

One day while Sage was praying to God, a desire entered his mind. For the past few months his cow had not been producing milk.

So he thought, “My cow has got old. Maybe I should go to King and ask for new cow.”

One day he went to palace, He waited while King was praying in temple.

After seeing him Sage said to himself, “I won’t ask him for cow.. ”

As King was coming out of Temple, he saw that Sage was leaving without meeting King.

King stopped him and said, “Why are you leaving?? Please tell me What you want.. I will give you anything..”

Sage smiled and said, “You told me you took an oath that you would not be indebted to anyone.

I too have taken an oath. My oath is that if anyone is in need then I won’t take anything from that person.

That’s why I won’t take anything from you.”

King got confused and asked, “But then why won’t you ask for anything to me?”

Sage replied, “When i saw you praying. You were begging to God to give you wealth and fame.. You yourself were in need of material things.

So how can i ask you for anything??

How can i ask you for anything from anyone in this world when everyone is here begging to God for one or other thing.

God has shown me that everyone is beggar and therefore if i need something, I will get it from him..”

You May Also Like: Dark Shadow Message to King

Keywords: King and Sage Stories – Everyone is Beggar Moral Story, We are All Beggars here Wonderful Story to Learn Best Life Lesson