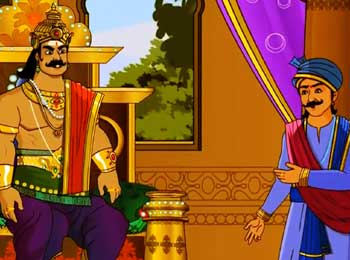 Once, at the Kingdom of Kashi ruled by King Brahmadatta, royal priest Devdutt thought, “King respect me a lot. All this honor i get, i don’t know that it is because of my knowledge or because of my virtue (morality and good behavior). I should try to know this.”

One day, while returning from King’s court, When Devdutt was passing by treasury he stopped at treasury and went inside then silently picked up a coin and left.

Treasurer was surprised to this. He thought, “Why would a great person like Devdutt would pick up a coin from treasury without saying anything to anyone. If he picked coin from treasury then there must be some reason. May be he was in hurry, that’s why didn’t said anything. He will tell me later.”

On second day, Devdutt did same and didn’t said anything to treasurer. Treasurer saw this again but remained patient and kept silent and thought that may be even today Devdutt didn’t had time to tell him reason.


Third day, while passing by treasurer Devdutt stopped and went inside and this time he picked up handful of gold coins. Now treasurer couldn’t keep silent. He immediately called soldiers and arrested Devdutt.

Next day, Devdutt was presented in front of King. Treasurer told everything to King. Everyone in court was surprised that such great scholar was stealing from King’s treasury.

King got angry and said to Devdutt, “You have committed a great crime. Not only that, you also hurted our faith. You will be punished for this.”

After saying this to Devdutt, King called soldiers and told them to cut all fingers of Devdutt’s hand as punishment for his crime of stealing from treasury.

Listening to this Devdutt smiled. Seeing him smiling, King asked him, “Why are you smiling at such time?”

Devdutt said, “I didn’t steal money to become rich. I just wanted to know if you respected me because of my knowledge or my virtue (good behavior/ morality).

I tested this and today, i got my answer. My knowledge is same as before but in last few days, only thing that changed was my virtue, when i stole my virtue was broken and because of that i was getting punished.”

King understood whole situation and he freed Devdutt with due respect.

Moral:
It is not just knowledge or talent which get us Respect but it is our Virtue, Moral and Good behavior towards others that get us Honor and Respect.


You May Also Like: Child Lesson to King! Be Humble