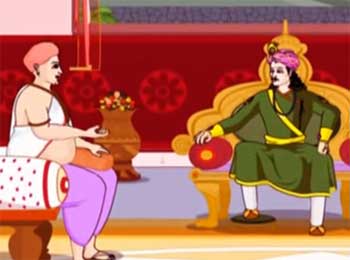 Once there was food shortage in kingdom. So, King called all his ministers and nobleman from countries for meeting. In meeting he asked, “What is the cheapest food item?”

Ministers and other members said that rice, wheat etc are available after a lot of labor and that too when there is no wrath of nature, therefore in such conditions these food items can not be called cheap.

Just then a nobleman who had a passion for hunting said, “My Lord, I think cheapest food item is meat. It takes less effort to get it and is nutritious to eat.”

Listening to this, everyone present there supported his point but Prime minister was silent.


Emperor asked him, “What is your opinion about this?”

Prime minister replied, “I will put my thoughts before you tomorrow.”

Seeing him, Prime minister said, “In evening, King had suddenly became ill and doctor said that if 20 gram flesh of a nobleman heart can be brought to him then life of King can be saved. So i came here to take only 20 gram of flesh from your heart and for this you will be given a million gold coins.”

Hearing this, nobleman face got pale and he fell at his feet told him that he can’t gave his flesh. On contrary gave him million gold coins from his side and apologized.

When Prime minister left, nobleman closed his door and took a breathe of relief. Prime minister then in turn visited all the noblemen and ministers who were present in meeting and asked for 20 gram flesh but no one agreed, on contrary everyone gave millions of gold coins to the Prime minister.

In this way, after collecting about 100 millions gold coins, Prime Minister returned to his palace before dawn and next morning in court when all nobleman and  he presented those coins before King.

Emperor asked, “What’s all this?”

Prime minister replied, “I went to buy 20 grams of flesh of heart from all rich nobleman and ministers but instead of flesh so much money was collected. Now tell me King think yourself how cheap is meat?”

All minister understood their mistake and apologized.

Learning:
Life is Priceless. Let us not forget Just as we Love our lives, in same way all animals also Love their Lives but are not able to Save themselves because they can neither speak nor can they express their sorrow.