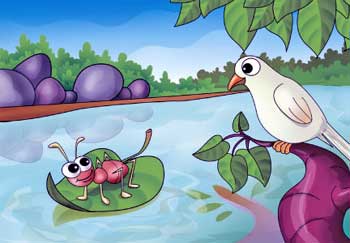 One day, an ant was searching for some water. After walking for a while, she reached a spring. Ant in try to drink water from spring, she climbed up a blade of grass and slipped, fell into water.

As soon as ant fell into water, a dove who was sitting on near by tree noticed. Seeing ant in trouble, dove quickly plucked off a leaf and dropped it into water near struggling ant.

Ant quickly grabbed on to that leaf and climbed up on it. Soon it was carried to safety to dry ground.


Just some time later, when ant was still around, a hunter came there and was carrying net. As hunter was going to throw his net toward dove, hoping to trap it, ant saw it and understood what was about to happen.

Ant quickly walked on to heel of hunter and bit him.

Feeling pain, hunter dropped his net and listening to all this sound, dove saw hunter and quickly fly away to safely.

Moral:
If we Do Good to Other, It will Return to Us. 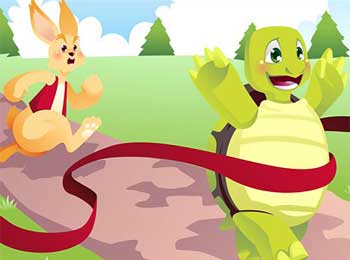 Once a hare made fun of tortoise for his slow walk. Listening to this, tortoise challenged hare for a race.

Hare laughed and said, “You must be joking.. But all right..!! I accept your challenge. Tomorrow we will have race.”

Next day, both reached at decided place. At starting point, both stood.

As soon as race started, hare ran off, leaving tortoise far behind. After running for a while hare stopped and started looking for tortoise.

Hare waited for awhile but not seeing tortoise in sight, he sat below a tree and felt sleepy, “I might as well take a nap.”

He thought even if tortoise catch up to him, he can easily win this race and fell asleep.

Slowly tortoise slowly reached there and passed by sleeping hare. Tortoise walked on slowly and steadily.

By the time hare woke up, tortoise was near finish line. He ran as fast as he could but couldn’t catch up with tortoise and lost the race.

Moral:
Slow and Steady can Win the Race.