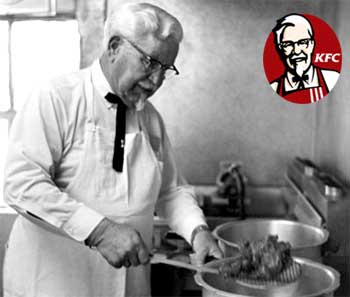 Sander’s was born in 1890. When sander’s was 5 yrs old, he lost his father. His mother who was housewife had to go out to work to earn for family and sander’s had to take care of his siblings. He used to look after and cook for them. By age of 7 his skills got good with cooking.

At age of 10, he began to work at local farmer. Soon, his mother remarried and sander had tumultuous relationship with his stepfather due to which he dropped out of 7th grade and left his home by himself.

At age of 14, he took job for painting horse carriages and then moved to Indiana to work as farmhand for 2 yrs. At age of 16  he falsified his date of birth and completed his service commitment as teamster in Cuba.

At age of 19 he met Josephine while working on rail road. Soon, he got married to her. They had three kids (son and two daughter). His son died at early age. Now, he found a job at Illinois central railroad but soon had to lost even this job due to brawl with his colleague and his wife left him and moved to her parents with kids.


He used to study Law by correspondence. After losing job he started to practice law but even his legal career ended after a fight with his own client. He moved back to his mother and again went to work as labor for railway. Here he started to work as Life insurance agent but eventually fired.

At age of 30, he established a ferry boat company which was an instant success. After 3 yrs he sold all his shares of ferry boat for 22,000$ and used this money to establish a company manufacturing lamps but even this venture failed. After this sander’s moved to Winchester, Kentucky to work as salesman but soon he lost his job also.

In 1930, Sander was offered a rent free station to run by Shell oil company where he began to serve chicken dishes and other meals. Slowly his popularity grew and soon his service station became famous throughout Kentucky. It was called “Kentucky Fried Chicken of Harland Sanders.” All customers noted the quality of its seasoning, which he prepared from 11 different spices. Life began to improve.

Harland Sanders bought a service station, motel and cafe at Corbin, a town in Kentucky. He left Claudia, as manager of the North Corbin restaurant and motel. He started to work as assistant cafeteria manager in Tennessee.

For first time sander franchised “Kentucky Fried Chicken” in 1952. Restaurants sales lead to popularity of KFC and increase in income but life hit hard on him once again, due to some reason his sales dropped drastically and he was forced to sell all his property to pay his debt.

At age of 65 he was broke and was living off on Social Security Check of 105$. At this time he started to think about all and upon reflection he decided that he can sell his recipe to other restaurants. He wandered throughout U.S. with his spice recipe and pressure cooker visiting restaurants of America. Even this time it took long before he could find his first customer. After 4 years KFC was very successful and after a deal his net worth estimated at $3.5 million.

In 1980, at the age of 90 years, Harland Sanders died. In recent years he was traveling, playing golf and ran their own restaurant Claudia Sanders Dinner House with his wife.

Moral:
Never Give Up. Staying Positive and Passionate can help us to go through hard time in life and start again. Despite getting failed again and again we should not lose Hope.

You May Also Like: Traveler’s Thoughts..! (Positive Thinking Leads to Positive Results)