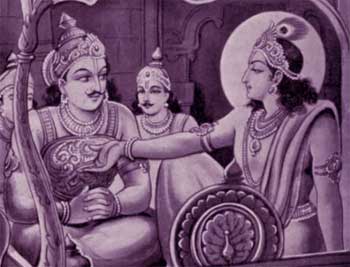 Once Karna met Shri Krishna and said, “My mother left me moment i was born, was it my fault that i was born a illegitimate child?

I didn’t got education from Dhronacharya just because i was considered a non- kshatriya and then when i was able to learn from Lord Parshurama, he gave me curse to forget all what i had learned from him since i was a Kshatriya.

I was disgraced in Draupadi’s swayamvar. My mother Kunti finally told me truth just to save her other son’s.

Whatever i have today was because of Duryodhana’a charity and friendship. So how i am wrong in taking his side??”


Shri Krishna replied, “Karna… I was born in jail. Death was waiting for me even before i was born.

I was separated from my broth parents and from birth i was attacked many time. I didn’t had any education till i was sixteen while you were given education from childhood.

You got to marry girl of your choice but i didn’t get to marry girl i loved rather i ended up marrying those who wanted to marry me and one’s i rescued from demons.

I had to move my whole community from the banks of Yamuna to far off Sea shore to save them from Jarasandh. I was called a coward for running away!

Padava’s you talk about had to go for fourteen years of exile and then when they returned there was attempt to kill them.

Remember Karna.. Everyone has to face challenges in life. Life is not fair on anybody.

If Duryodhana has a lot of unfairness in life, so does Yudhishtir.

Always remember, Life may be tough at a point but DESTINY is not created by the what happened to us but by the STEPS we take.”