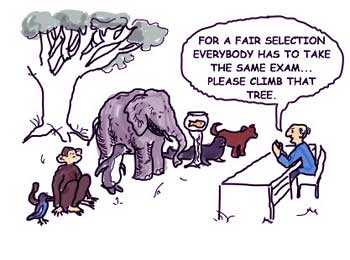 One day, King of Forest, Lion declared that no one in forest will remain illiterate from now on wards. Every animal must send it’s child to school.

In which exam did he fail?
He failed in exam of climbing tree.


Elephant wanted his kid to top this exam. He made it his mission to get his kid on top in exam of climbing the tree, he started sending his kid to coaching classes.

Monkey kid came first again. Principal called him on stage and gave him a medal.

Monkey was happy and showing it by jumping from one tree to another. On other side, Feeling humiliated, elephants, camels and giraffes got angry at their children.

One of them said to his kids, “You dumb, i sent you to this expensive school. Even had you joined coaching classes and yet you haven’t learned even about climbing. You should learn something from that kid, monkey kid who came first.”

Fish came with her kid. Teacher said, “There is problem with you kid attendance.”

At this her mother shouted, “No, this school is opened by king of forest and this the the best school. I have some reputation in this society. I can’t send you to that small school in pond. You have to study in this school.”

Every parents was angry with their kid who didn’t passed the exam and were scolding them.

On way, an old banyan tree saw this and asked them, “Why are you beating your kids?”

Giraffe replied, “He failed to climb the tree.”

Old banyan tree said, “But why do you child have to climb tree? His neck is so long, he can easily eat fruits at heights.”

Then looking at elephant he said, “You can use your trunk and get any fruits you want to eat. Why does your kids have to learn to climb tree?”

Do not humiliate the elephant baby by asking it to climb on the tree. Do not forcibly impose failure tag on him. It’s okay to encourage the monkey but do not declare the remaining 34 children as unworthy, careless, duffer, failure just because they failed an exam which is not suitable for them.

Of course the fish cannot climb the tree but one day it will measure the whole sea.

Learning:
Everyone is Unique. Appreciate the abilities and talents of your children, be it in education, sports, dance, art, acting and Let them do well in the Same direction.

It is not necessary that all children top in Academics. What they need are Good values and Moral values so that they do not choose Wrong path in Life.

Everyone is a genius. But if you judge a fish by its ability to climb a tree, it will live its whole life believing that it is stupid. – Albert Einstein

You May Also Like: Boy’s Prank and Weaver Respect..!