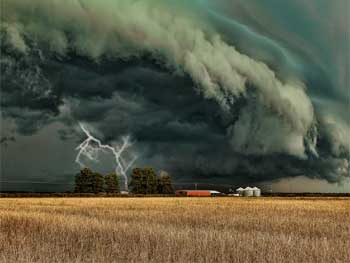 Once a farmer owned a land along Atlantic sea coast. It was a difficult for farmer to do all the work alone. So he would constantly advertise to hire someone for help.

Most people were reluctant to work on farms there because of dreaded awful storms occurring across ocean, wreaking havoc on buildings and crops.

Still some people would come for interview but would refuse after knowing working conditions.


Farmer questioned, “Are you a good farmhand?”

Man answered, “Well, I can sleep when wind blows.”

Farmer didn’t understand that but still he hired him because he desperately needed someone for help.

Man started to work on farm. He would stay busy from dawn to dusk. Farmer was satisfied with his work.

One night, wind howled loudly off shore. When farmer heard it, he jumped out of his bed and grabbed his lantern. He rushed to man sleeping in his quarters, so that they both could prepare for safety of things outside, before storm come.

Farmer went inside and shocked man and yelled, “Get up.. Hurry.. Storm is coming! We have to tie things before wind blow them away.”

Man rolled over in his bed and said firmly, “No Sir, I already told you, i can sleep when wind blows.”

Farmer was enraged by his response. He still couldn’t understand what he meant but seeing him sleeping without care, made him angry and he wanted to fire him from his job.

But farmer didn’t had much time, so he hurried outside to prepare for the storm.

When he went to secure things outside, to his amazement, he discovered that all of haystacks were already covered with tarpaulins. Cows were in shed and chickens in coop and doors were barred.

Shutters were tightly secured and everything was tied down. Nothing could blow away if storm comes.

Just then farmer understood meaning of words man said. Helper was able to sleep because he had done everything he could do to secure farm from storm.

Farmer too returned to his bed and slept without worrying about things.

Learning:
When one is prepared Spiritually, Mentally and Physically, he has nothing to Fear.

You May Also Like: Two Sanyasi and Narada Muni Story