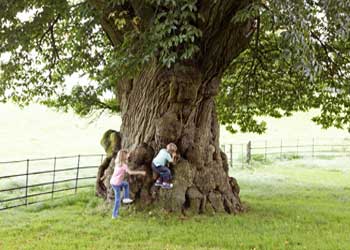 Once an eight year old boy Tom was playing in park, climbing tree and hanging around. While playing he got on top of 30 feet high tree, hanging on one of its branch and swinging back and forth. Boy was having fun and didn’t realize that branch could break.

His cousin Jim, who was just year older than him was playing on same tree. He was hanging just 10 feet below branch of that tree.

Tom father and Jim mother noticed that kids were up high on that tree and they could fall. Before they could get kids back, suddenly a gust of wind came over the tree and tree started to sway.

Tom could hear voice of his father saying, “Tom, hold on tightly.”

Just in that moment they saw that Jim had fallen out of that tree and was little hurt. Tom scampered down the tree to safety.

After getting home, Jim’s mother asked Tom’s dad, “Tom and Jim both were hanging from same tree but still  Jim fell from that tree and Tom didn’t. How?”

Tom’s father explained to her, “When gust of wind came, you yelled out  ‘Jim don’t fall’ and that’s why he did fell.”

He explained further, “Mind have a very difficulty time processing negative image. In order for Jim to process the command of not falling, he first had to image falling and then try to tell brain not to fall, when tom was told to hold on tightly he had an instant image of him hanging on tightly.”

Moral:
Using Positive Words will have better Results that using negative words. To Break out of Bad Habit we Need to develop Good Habit and Automatically things will start to get Better and We will feel Positive.

One thought on “Results of Positive Vs Negative Words..!!”