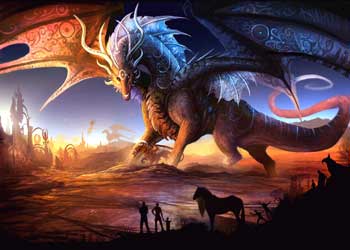 Once in dragon land, there was a young dragon name Brad. There was a tradition in dragon land that dragons would have to chose his side and become either a dragon of light or darkness.

When time comes each dragon had to chose his side and join army. All dragons would chose his side and train for years before big change but Brad was undecided and time was running out. At dawn his wings would be changed for life.

Both group of dragons had hatred for each other and once wings change they will remain like that forever and dragon have to had hatred for other for rest of his life.

Because if this Brad went to forest to think and in hope to find answer. While sitting there in silence he saw the beauty of night. Beautiful white full moon shimmering, cool and soft wind blowing, night full of stars.


For nothing in the World did Brad want to become a dragon of light in order to hate all that wonder and he felt his wings slowly begin to dye into the color of the night.

As time went by, Night was losing its strength and first light of dawn was making its way. Brad loved that time of day and gentle first ray of sun on his face. Brad didn’t want to hate it either.

Brad felt sad and tears flooded his eyes. Before Brad wings color would change for final, he flew deep into lake to find peace and then flew up high into sky as high as it could, in order to escape its fate.

When he had flown so high that the cold prevented him from moving his wings, he opened his mouth to spit out a great flame, as if to spend it completely, to never have it again But instead of fire, a thin layer of frost came out of his mouth and covered fields below.

After attaining final form. Brad would not decorate fields with his frosty breath and would remind world that its not necessary to chose between day and night when you don’t want to hate.

Moral:
It’s not necessary to see things as Black and White or Chose sides. When we don’t want to Hate. Having Peace with ourselves is Best way to Live.