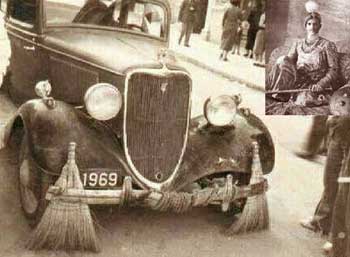 One day, during his visit to London, King Jai Singh was walking around Bond Street in casual dress. There he saw Rolls Royce showroom and went inside. There he looked at cars and then inquired about price and features of cars.

When Salesman looked at him and saw his casual Indian Attire, he considered him just another poor Indian citizen and insulted him and almost showed him way out of his showroom.

After this insult, King Jai Singh didn’t said anything to Salesman at that time but went back to his hotel room and asked his servants to make call to showroom and tell them that King of Alwar, India is interested in purchasing their cars.

Call was made and everyone at showroom prepared for welcome of King.


After few hours, King went to Rolls Royce showroom again but this time, he went with his full astonishing Royal manner and in his Royal costume. Until he reached there was a red carpet ready on floor of showroom to welcome him.

All salesmen were bent with respect. King Jai Singh purchased all six cars, that they had at showroom at that time and paid full amount with delivery costs.

Salesmen at showroom were really happy about sales but no one knew what was coming in near future.

After reaching India, King ordered municipal department of his city to use all those six Rolls Royce cars for cleaning and transporting city’s waste.

World’s number one Rolls Royce cars, luxury cars which were so costly that common people couldn’t even afford to buy in America/ Europe, were now being used as transportation vehicle for city’s waste. This news spread all over the world rapidly and reputation of company was in drains.

Company’s image was so ruined in Europe and America that if someone used to boast about owning a Rolls Royce, people would laugh and make fun of them saying, “Which one? Same that is being used in India for carrying waste of city.”

Due to such reputation damages, sales of Rolls Royce dropped rapidly and revenue of company owners started falling down.

Company had to do something to save it’s reputation. They sent a Telegram to the King Jai Singh in India for apologies and requested to stop transportation of waste in Rolls Royce cars. Not only this but they also offered Six new cars to king free of cost.

When King Jai Singh observed that Rolls Royce has learnt a lesson and they are sorry for their Mistakes, King stopped using those cars for carrying wastes.