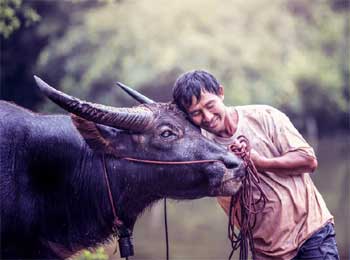 Once upon a time, a Guru and his disciple were passing through a village. Both were very hungry. They saw a house near by and knocked on the door.

A man dressed in torn clothes came out.

Guru said to him, “We are very hungry. Can we have something to eat?”

Man welcomed them in his house and fed them. After eating, when Guru looked around, he saw a very fertile land near by. Land was fertile but looking at crops, it seemed that man didn’t paid much attention to the field.


He went to man and asked, “How do you make a living?”

Man replied, “I have a buffalo which gives a lot of milk. I make a living out of it.”

It was night time, so Guru asked to man if they can stay for night. Man agreed. Guru stayed there along with the disciple.

At night, Guru woke up his disciple and said, “Let us get out of here now and we will also take his buffalo with us.”

Disciple didn’t like what his Guru said as man helped them so much and buffalo was only source of his living but what could he do. He followed his Guru’s instruction and both took the buffalo along and left silently.

Even after years this thing kept bothering disciple.

So, one day disciple decided to meet that man. He reached village and when he reached near that man’s field, he was surprised to see that the vacant fields were now turned into fruit orchards.

Disciple couldn’t believe his eyes, just then man appeared in front of him. Disciple greeted him and said, “Years ago, i met you with my Guru.”

Man invited disciple to his house and then said, “That day my buffalo was lost. I looked for it everywhere but couldn’t find. I didn’t know what to do.

Then i went to forest and started cutting wood and sell them. With that money i bought some seeds and planted them in my field.

Harvest was good that year. I used that money to plant fruit orchards. Now, my business is going very well. At present i am the biggest trader of fruits in this area. Sometimes, i think if i had not lost my buffalo that night, all this would not have happened.”

Disciple said, “You could have done this work earlier also..! Before losing your buffalo.”

Man replied, “At that time my life was going on easy without any hard work, i didn’t think of doing hard work as money from selling milk was enough for daily needs. I never thought that i could do so much.”

Many times in our life, there are things which prevent us from becoming big. If the

re is such laziness in your life then leave it today. It is difficult to do but not impossible.

Search Keywords: If Man Had not Lost his Buffalo! Story about Laziness and Hard work, Deep Meaning Moral Stories with Life Lessons, Guru and Disciple Story, Many Things to Learn from One Story, What Guru can Foresee We Can’t Short Story, Story about Letting Go