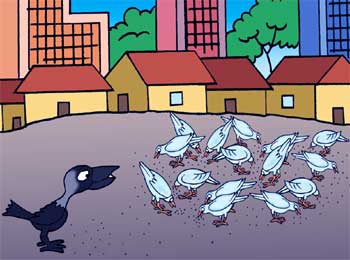 A crow who had recently learned to fly, flying from one place to another, noticed that humans fed chilies to parrots and feed grains to white dove.

Crow was hungry and hoping that someone would give him some food as well, he cawed but nobody took note of him.

He thought to himself, “It’s better to be a dove than a crow.”

Just then he saw that someone had left a bucket full of white paint out in open. Seeing that he had an idea.


He jumped into bucket of paint and before workers came, he flew out. Now, he was as white as dove.

Then he flew towards doves and settled next to them. He too pecked at grains given to doves. None of dove noticed him that he was a crow.

Crow was so happy that he cawed loudly, “Caw, Caw.”

Immediately doves knew that this bird in white was crow. They started cooing loudly and because of this poor crow had to flew away.

“I never knew doves could be so wild.”, He thought to himself.

Little while later, crow saw a flock of crows and thought, “Ah! friends..”

He flew towards them but crows were startled to see a white bird flying among them and they all flew away, leaving him behind.

Crow became sad and to add to his problems, it started raining. Crow rushed to find shelter but then he saw that rain was washing away the paint. He was black once again.

Crow was happy to be himself again. Later, he joined another flock of crows cawing loudly, proud of his black color.

Moral:
Never Try to Copy Other as it Never lasts Long and one can’t find Happiness that way, Therefore, Always be True to yourself.