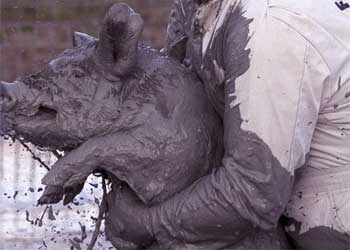 Once an elephant was coming back towards it’s herd from bath in a near by river. On his way, he saw a pig walking toward him.

Pig was coming from muddy waters and it was completely covered in mud.

When elephant and pig were approaching each other, pig saw that elephant moved side to allow pig to pass.

While walking past, pig made fun of elephant saying that elephant was afraid of him.


That pig went to other pig standing near by and told them about it. Listening to this all pig started to laugh at elephant.

When elephant reached it’s herd. Elephants from herd saw all this and those pig laughing at their friend elephant. One of them asked him, “Were you really afraid of that pig??”

Elephant smiled and replied, “No, my friend.. I could have crushed him under my feet if i wanted to but that pig was all muddy and if i had not let it pass then that mud would have splashed on me too. That’s why i avoided that and stepped aside from his way.”

Here Pig covered in Mud represents people with Negative Energy. When we Interact with such people, We allow our space to be Infiltrated by that Energy too.

Elephant represents our-self. Even though elephant could have reacted to this but He was wise and understood that he need not to waste his energy on such petty thing and ignored it.

Moral:
In our Life We should Not let Such people Disturb our Peace and rather then fighting and arguing with them, one should just Ignore it.

Once you Learn that you need not to be distracted by such petty thing then You can focus all your energy on things that matter and simply discard things that are of a lower significance.