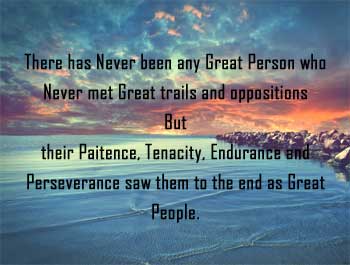 One day, a little boy asked his father, “What does word Great means?”

Boy said, “I have read many time that this person is great, he did this and that. Please explain me who are these great people and how they become great?”

Father thought of a idea to teach his son about being Great.


Father asked his son to bring two plants and then told him to plant one of them inside house and other outside house. Boy did as his father said.

Now, father called his son and asked, “What do you think? Which one of these two plants will be bigger and safe?”

Boy replied, “Papa, plant which is inside our house will be safe, therefore it will grow big where as plant outside house is not safe at all, it will have to withstand many season and no one will be there to take care of it. It can be eaten by animals.”

Father smiled and said, “We will know this at right time and at same that time i will give you answer for your question.”

Boy left for higher studies and after four years he came back to his house. When he saw that plant which he had planted there before leaving, he said to his father, “See, i told you that nothing will happen to this plant and it will be safe and grow big.”

Father smiled and said, “You should go outside and see another plant.”

When boy went outside, he saw a big tree. Boy couldn’t believe his eyes. He couldn’t understand how plant outside was able to grow much bigger than plant inside house.

Then father explained to his son that plant outside was able to grow this big because it faced every season and many difficulties. Because plant inside was safe, it didn’t face any weather not did it get proper sunlight, therefore it didn’t became big.

Here is answer to your question about being Great – To become a Great person, One fails many times, had to face many difficulties and overcome those difficulties with their will power and determination. Only after that they were able to become Great.

If you don’t give up on your work, even after you fail then remember that no one can stop you from becoming Great.

One should Always tell to himself that: Even if i face many difficulties, even if i get discouraged again and again, I will not stop until i reach my destination.

You May Also Like: Using all Your Strength – Father Son Story