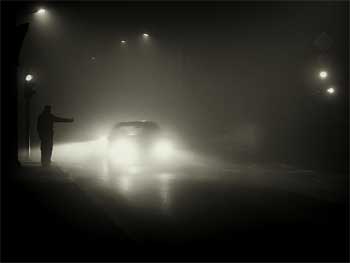 Once a man was standing on a lonely highway in a dark rainy night. He was waiting to hitch a ride to go back home.

Man was standing there alone for long time and was scared, He could barely see anything around. Just then he saw some light. It was a car approaching him very slowly and silently. Suddenly that car stopped before him.

Desperate to get home, man jumped into car, only to realize that there was no one in car, not even the driver.


Man got scared, he wanted to get out but he was too scared to move, just then as car approached a bend, a hand appeared out of now where and steered the car over that bend safely.

As man saw this, he jumped out off car and ran all the way to the nearest coffee shop.

As he was running, he could feel that something was behind him. Man ran as fast as possible.

As soon as he entered the shop, a couple of guys also entered in shop and shouted at man, “Hey! Here is that idiot who jumped into our car while we were pushing it over the hill.”


It was especially dark night, when a young woman was walking back home from work. Her route was having a cemetery on her way back to home.

As she came near cemetery gates, she began to shake with fear. She was scared to pass by that cemetery alone.

Suddenly, she saw a man walking just a head of her. Seeing, she was relieved and walked fast and caught up with him.

She asked him to walk with her till they get pass cemetery. As they were walking by, girl told that man that she was terribly afraid of dead.

Listening to this, man looked at her and smiled and said, “But why should you be afraid of us?”