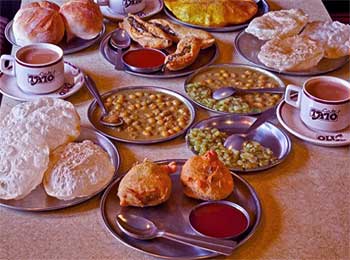 Rohit was traveling from one city to another but he missed his morning train. So while waiting he thought of having breakfast.

He went out of station and started walking toward a near by hotel to eat. On his way he saw two kids sitting on sidewalk. There condition was not looking good and by look on their face he could guess that they were very hungry.

He felt bad for them and gave them 10r and left. After this, as he was walking toward hotel he thought to himself, “How stupid of me..!! I gave them just 10rs.. What can they buy to eat with it, When i can’t even get a cup of tea with 10rs.”

He felt ashamed of himself and went back to those kids. He asked them if they would like to eat at hotel with him.


Kids were confused and looked at each other. As they were very hungry, they accepted his offer. When kids were at the hotel, Hotelier stopped them from entering as their clothes were too dirty and torn.

Seeing this Rohit went to him and asked him to allow those kids to enter as they were with him and he is going to pay for their food. Seeing this Hotelier understood whole situation and felt ashamed at his act of stopping those kids from entering.

They got inside and got seated comfortably. After this Rohit asked kids, “What do you want to eat.” Kids kept silent. Rohit ordered food.

As soon as food came, he saw smile on face of boys and felt happy. When the children started eating, the happiness of their face was somewhat different.

After having food. They returned back. Before leaving Rohit handed them some more money and asked them to buy some clothes.

Whole incident was over. Rohit was back to his normal routine but even after many days he couldn’t stop thinking about those boys and felt bad for them. One day while visiting temple he said, “God, Where are you?? How can you sit quietly when there are children like them who are suffering from hunger..”

Just in next moment a thought struck his mind, “Who had been providing food for them until now?? What i did for those boys, could i have done that with my own thinking??”

At that moment he realized and understood that ever we do is just a part of God’s Plan. Whenever we Help someone it’s because God find us worthy to help someone, he send us to help that person.

Moral:
Refusing to Help Someone is like Refusing Work of God. If you see Someone in Need of help and You can Help that Person According to Your Capability as No Help is Small for Person who Needs it.

Keywords: Helping Others Beautiful Moral Story about Compassion, Stories about Helping Needy, God’s Will and His Way’s Short Story