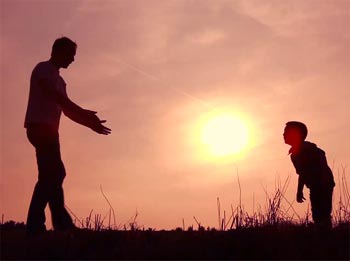 A young man pampered by his rich dad always, was going to graduate next week. Few weeks before he saw a very beautiful sports car in a showroom and wanted to get it was graduation gift from his dad.

The day he saw that car in showroom, before coming back home he went inside and took details of dealer and car. He gave certain signs to his father that he wanted that car on graduation day.

Young man was really excited as he was expecting his father to gift him that car because he always got whatever he wished for from his dad.

Finally graduation day came. His father called him into his study and ask him to sit. Father got up and brought a beautifully wrapped gift. Father gave that gift to him telling him how proud he was to have such fine son and how much he loved him.


Young man very happily opened up the box, hoping to see sports car key inside it but what he got was a Book. He got very disappointed and angry to see just a book and not keys for sports car.

In anger he raised his voice and said to his father, “With all your money you got me this??” and stormed out of house, leaving book behind.

Young man got so angry that he left his father’s house without even waiting for his father response and decided never to come back.

Many years passed and young man became a successful businessman just like his father. He hadn’t seen his father since graduation day.

One day he received a telegram about his father has passed away and willed all his possession to him for which he needed to come there and take care of things left behind by his father.

When he arrived at his father’s house, he felt sadness and regret filled his heart. He went to study where he last spoke with his father. There he began to look for things to sort.

In one of the drawers he found the same book which his father had given him on graduation day. All his memories came back in a flash. He sat down on same chair and with tears rolling down his face, he opened the book and began to turn pages.

After turning few pages he found a hole in the middle of book with the car key in it with tag on it. On tag it was written..

“With Love for my Precious son, who made me so Proud..”

Moral:
Many times in Life we Prejudge people we meet and things we Experience in Life because they are not Packaged as we Expect them to be due to this we make Drastic Choices based on Misunderstandings.

In times of Anger, We need to stop for a Moment and think before making any Harsh Judgement of a person or a situation. Most importantly we need to Learn to forgive Before it’s too Late.

You May Also Like – Husband Anger..!! (Never Act in Anger)