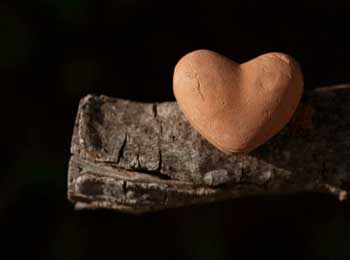 In a village, lived a couple with their son. Their son used to stay irritated all the time and used to get angry over little talks.

Everyday, he used to get in quarrel with people in his neighborhood. He didn’t even had any friends.

Parents got worried about their son.

One day a monk arrived in village who was very famous. When parents heard about him, they took their son to him and said, “This is our son. Problem is that he gets very angry and have no control over his anger. He fights with everyone. Please help him.”


Monk replied, “You leave your son with me for whole day today.”

After parents left, Monk said to boy, “Son! I will give you a task. Will you do that?”

Boy agreed to do.

Boy found this work somewhat strange but he started preparing two hearts out of clay. At time of making heart, he got annoyed many times in his mind.

He started thinking, “I have come here to give up my habit of getting angry but this monk is using me for such work…” but he somehow continued to work and prepared two hearts of clay.

He took those hearts to monk and said, “Here are two hearts of clay. Now, tell me solution for problem for which i have come here.”

Monk said, “I know very well. Why have you come here. First complete this work for me then i will do something about your anger.”

“Take one of this clay heart and go to potter and ask him to heat it well in furnace and then bring it back.”, said Monk.

Boy did as said and came back. Monk said to him, “Now, fill this heart with whatever color you want.”

The boy painted that heart red. After applying color, that heart started looking very beautiful. When the boy saw that heart prepared by his day’s hard work, he was very happy and started thinking, “I will take it to my house and decorate it in my room.”

He happily went to the Monk and showing that heart he said, “Look how beautiful this heart has started to look after coloring it.”

“Yeah, it looks so beautiful. After all, you have worked so hard to prepare it. But now you have to hit this heart with a hammer.”, saying this, monk handed a hammer in boy’s hand.

Boy didn’t want to break it but somehow controlling his anger, he attacked that heart with hammer. Heart was broke. Boy felt very sad.

But monk did not pay heed to him and gave him another heart made of clay and said, “Now strike this heart also with a hammer.”

Boy did the same but with the blow of the hammer, mark of a hammer emerged on that heart but that blow didn’t break heart.

The boy was surprised to see this but couldn’t understand why monk had asked him to do so. He thought that monk was mad and said, “My whole day was spent here in useless work. Now I am not going to stay here even for a moment. I am going.”

Monk stopped him and said, “before going, at least try to understand meaning of what you did..”

Now, Monk began to explain to him, saying, “Son! The heart of clay you were working on. It was a representation of the real heart.

Just as you heat the heart of clay in the heat of fire, similarly your heart gets heated in the furnace of anger. You feel that in this way you are standing firmly in front of this world, but it is not so.

To bear the pain and sorrow of life, you have to soften your heart. Then whenever any sorrow comes, it will definitely have an effect on your heart for some time but it won’t break. Rather, it will get better in a few days.

Anger does more harm to yourself than it does to others. So stop being angry. Place love and forgiveness in your heart, make it humble.”

Boy understood and promised monk that from now on he would control his anger and improve his behavior.

You May Also Like: Sant Surdas Story – Anger Issue!!

One thought on “Heart of Clay – Young Boy and Monk Story”