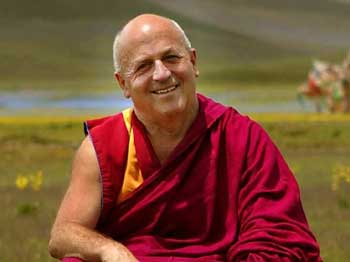 Once upon a time, lived a high class rich man in a kingdom. As he rich man became older and realized that suffering for old age was about same for rich and poor. So, he gave up his wealth and went to forest to live as a monk.

In forest he practiced meditation and freed himself from unwholesome thoughts and became contented and happy. Monk grew Old and his peacefulness and friendliness gradually drew some followers.

Among followers there was one monk who never lost this glimmer of inner happiness and always wore a big smile. His master knew secret of his happiness.

In those times, most monks used to look pretty serious. Sometimes other monks would ask him why he was so happy. He chucked and said, “Even if i told you, you wouldn’t believe me an if thought i spoke lie then it would be dishonor to my master.”


One year, after rainy season, Monk and his followers went to city where King permitted them to live in his pleasure garden for spring time.

King was a good man, who took his responsibilities seriously and took good care of his people. He always think of ways to increase people’s prosperity and welfare, save them from any danger from neighboring countries, often had to make peace between his own rival ministers of state.

As summer approached, King learned that monks were preparing to return to forest. Considering Master’s health, King requested Master Monk to remain there in Kingdom and let his followers return to forest.

All followers returned to forest. There all continued practicing there meditation. Monk who used to smile all the time gained so much wisdom and peace that he became even happier than before.

He missed his Master and wanted to share his happiness with him. So he returned to city for a visit.

When he arrived, he sat on a rug at the feet of his Master and he didn’t speak much but would say, “What happiness! Oh What happiness!”

At same time, King came to visit. He paid respect to Master monk. However, monk who came from forest just kept saying, “What happiness! Oh What happiness!”

Monk didn’t even stop to greet King and show proper respect. This disturbed King and he thought, “With all my worries, as busy as i am. Even when i took time for visit and this monk doesn’t respect me enough to even recognize me. How insulting!!”

He said to Master monk, “Is this monk stupid? Why is he so full of happiness. Does he lie around here so lazy all the time?”

Master monk knew King thought and said, “Oh King, have patience and i will tell you the source of his happiness.

Not many know but once he was a King, just as rich and mighty as you! Then he was ordained a monk and gave up his kingly life. Now he thinks his old happiness was nothing compared to his present joy!

He used to be surrounded by armed men, who guarded and protected him. Now, he sits alone in forest with nothing to fear, he has no need for armed guards. He has given up the burden of worrying about wealth to be protected.

Instead, free from worry of wealth and fear of power, his wisdom protects himself and others. He advances in meditation to such inner peace and that’s why he can not keep himself from saying this.”

King understood at once. Hearing the story of Happy Monk made him feel at peace and stayed there for a while and received advice from both of them. He then honored them and returned to palace.

You May Also Like: Benefits of Chanting God’s Name..!