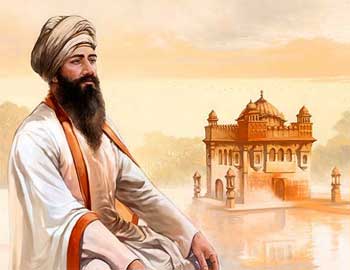 On one of his travels, Guru Tegh Bahadur met a King named Raja Ram Singh. There was conflict going in eastern territory of Assam and Raja Ram was asked to solve the matter.

Raja Ram asked Guru Tegh Bahadur, “You are true Guru. I beg for your help. My army can take care of them rebel King army but problem is Magical land of Kamroop on way to Assam. People of Kamroop may think we are invaders and will surely use their power to destroy us.”

(Kamroop was famous for being dangerous, visited long ago)

Guru Tegh Bahadur agreed to go on mission, “Yes, we will travel together and you need not to fear strange and mysterious power.”


Next day, Guru Tegh Bahadur and his follower started their travel with Raja Ram and his army.

Some of followers were concerned about travel so one of them went to Guru and said, “Is it wise to go on this trip? Land is so far away and dangerous.”

Guru replied, “Keep your gaze upon Light of God and Chant Sat Naam. You shall not be harmed.”

Next day, early morning everyone walked in pairs and small groups together chanting Sat Naam and meditating as they walked.

As they walked through jungles and hills, they could hear beautiful sounds and birds singing cheerfully.

After weeks of travel, landscape changed from warm jungle into cold mountains. As they were getting closer and closer.

One morning Raja Ram said to Guru ji, “We are near our destination. We need you to protect us from powerful magical forces. Guru ji Please keep us safe from attack.”

Guru ji wasn’t there to just protect Raja but also to teach him lesson.

As they reached there, soldiers set u camp, news of Guru’s arrival began to spread. News of Guru ji arrival reached great Temple of Magic.

Most powerful witches gathered and made a camp next to Guru’s camp and did a ceremony. After which suddenly dark clouds appeared over Guru ji camp and loud thunder and lightening started to stuck over Guru ji camp.

Guru ji and followers were surrounded by chaos and yet Guru ji remained calm and spoke to his followers, “Breathe long and deep, feel presence of God within you. Chant the name and powers of storm shall not come near those filled with light of God.”

All began Sat Naam Simran, witches got confused seeing that no one was frightened and were unaffected by such big storm.

Witches thought of another plan so that they can destroy whole army. Witches aimed all their powers together and lifted up a huge boulder. Massive stone floated air and they sent it flying across sky but still Guru ji and followers continued chanting Sat Naam.

Even when they saw huge boulder speeding toward them thought sky, they did not budge and knew that they were safe, they felt no fear. Boulder slammed into ground but no one was hurt.

Guru Tegh Bahadur reached for his bow and arrow. He pulled and aimed his arrow at the witches altar’s magic crystal.

Witches were surprise and shocked as they could not use magic anymore. Witches saw that arrow over altar.

Witches admitted defeat and realized that this was no ordinary man. Head Witch went to Guru ji and bowed down and said, “My greatest apologies. I give to your now. We were wrong to bother someone as great as you but we were just trying to protect ourselves because there is such large army trying to attack us.”

With compassion and grace, Guru ji answered, “I understand. Listen, it is not good to waste your precious spiritual energy or destruction. Now, give up this magic, it only causes harm and suffering. You need not to fear Raja Ram and his army. He is not here to hurt you. Let there be peace between all.”

Priestess and witches listened to Guru and left.

After sometime, Raja Ram came to Guru ji and boasted, “Guru ji you have saved us. Now, we will destroy rebel king in Assam.”

Raja replied, “Before, i would never have listened to someone tell me that but i have seen your great wonders. I do not how rebel King will change but i will do whatever you say Guru ji.”

Guru ji and his followers, Raja and his army went to Assam and met with rebel King. With Guru ji help both Kings opened up more and war was avoided. A peaceful agreement was made between everyone.