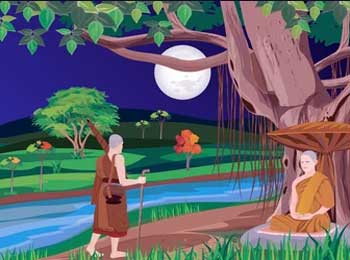 Once during a summer, a disciple was going to his village after taking a week-long leave from his guru. He was to walk all the way back to his home.

After walking for half day, he felt thirsty and started looking for source of water around him. Soon he found a well and drew water from it. After drinking that water he felt refreshed because water from well was sweet and cold.

After drinking that water, he thought of his Guru. So he collected some water in his musk (water bottle made of leather) and headed back toward the ashram.

When disciple reached ashram, he told his Guru ji everything and handed that musk filled with water to him. Guru ji drank that water and smiled.


He said to disciple, “Really this water tastes very sweet and cold. I feel refreshed.”

Disciple was pleased to hear such praise from his Guru. He again took permission to leave and headed back for his village.

When he left, another disciple who was listening to this conversation came to Guru ji and expressed his desire to drink that water.

Guru ji gave that musk to the disciple.

As soon as disciple took the sip, he spit it out and rinsed his mouth from fresh water from ashram.

Disciple said to his Guru, “Guru ji this water is so bitter and it’s not even cold. Why did you praised him so much for such water?”

Guru ji replied, “Son, what if there is no sweetness and coolness in this water. What matter is the feeling of person who bought it.

When he drank that water and felt good, he remembered me and love arose in his heart. He wanted to share that taste with me. That’s what important.

Just like you i didn’t like the taste of water but i did not wanted to upset his feeling by saying this. It is possible that when water was filled in musk, it taste changed. Because musk was not clean, water didn’t remained same.

But because of this love of the person who bought it did not diminish.”

You May Also Like: King and Royal Priest Story – Be Virtuous