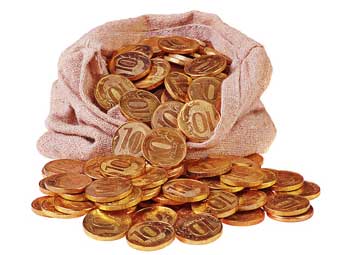 Once upon a time, in a village lived a rich man who had lost his bag of gold coins on street on his way back to home.

He tried to look for it everywhere but couldn’t find it. He became sad and disappointed.

At last, he went to village headman and after listening to his query headman issued a notice, “Person who finds and return that gold coin bag to rich man will be rewarded with ten gold coins..”

In evening an honest poor farmer found that gold coins bag and reported that to rich man.


On receiving the bag rich man opened it and counted his coins. Just then poor man asked for reward of ten gold coins.

After receiving his gold coin bag rich man got little greedy and didn’t wanted to give any money to poor man so he thought of a plan and said, “What coins?? You are really clever.. I have checked my bag and you have already taken your reward from this bag..”

Poor farmer was shocked and replied, “But.. I haven’t opened this bag at all..”

Headman asked rich man,”How many coins were in your bag??”

Poor farmer replied, “But i haven’t opened this bag.”

Now headman questioned poor farmer and understood whole case and said to rich man, “You said bag you lost contained 110 coins but this bag contains only 100 coins.. That means this is not your bag.”

Saying this village headman gave that old coin bag to poor farmer as reward for his honesty and rich man had to return empty handed because of his greed and lie.

Moral:
Honesty is Rewarded and Greediness is Punished. Therefore We should not be Greedy and Cheat others..

One thought on “Greedy Man and Farmer Story..!!”