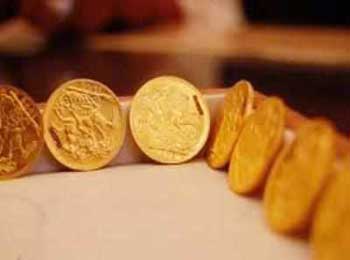 Once two men were talking sitting near a temple. After sometime a man came there, sat with them and started talking.

First man said that he have 3 chapatti and second man said he have 5 chapatti. Both men said that they can divide these between three.

But now the question was how can 8 chapatti can be divided between 3 people.


First man said, “We should divide each chapatti into 3 pieces then there will be total 24 pieces. Then we can divided them equally.” Second person agreed.

8 chapatti were cut into 24 pieces and each one got 8 piece to eat. Everyone ate their share and pacified their hunger and then fell asleep in temple courtyard.

On waking up, third man thanked two and before leaving he gave them 8 gold coins as gift in exchange for 8 pieces of chapatti he ate.

After he left, second man said to first, “We both should distribute 4 gold coins each.”

But he refused saying, “No. I had 3 chapattis and you had 5 chapattis, so i will get 3 coins and you have to keep 5 coins.”

Both of them started arguing. After this, both of them went to temple priest and told him about the problem and asked for solution.

Priest also got confused, both were fighting to give more to other.

Priest said, “Leave these coins with me and give me time to think. I will be able to answer you tomorrow morning.”

Priest thought that it seemed fine to divided coins 3 – 5, thinking this he fell asleep.

God appeared in his dream, priest told all things and asked for guidance.

Priest was taken aback and asked, “How so?”

God smiled and said, “No doubt that first man had made 9 pieces of his 3 chapattis but out of those he only shared 1 piece and ate 8 himself. His sacrifice was just 1 piece of bread, so he is entitled to 1 coin only.

Where as other man made 15 pieces of his 5 chapattis out of which he ate 8 himself and gave 7 pieces. Therefore, he is entitled to 7 coins as per justice.”

Essence of story: Our point of View and God perspective are very Different.

We are completely ignorant to understand the Divine Justice. We can’t understand what one deserve according to one’s Act.


You May Also Like: Priest Rescue Story – God’s Way to Help