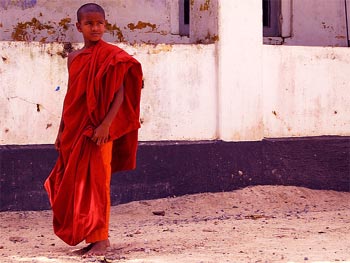 Once Akbar said to his wise minister Birbal, “You often say that God is everywhere…!!” So, Akbar took one of his ring out of his finger and said, “Tell me.. Is your God is in this ring??”

Birbal replied, “Yes, Sure.. He certainly is.. God is everywhere.”

“Can me make me see him??” questioned Akbar.

Birbal asked for time to answer that question. Akbar agreed and gave him six months to find answer and show him God in that ring. Birbal went home. Birbal dared not to face Akbar without answer.  So he stayed home thinking about answer.


One day a little monk came to his home for alms. Seeing Birbal pale face he questioned him the reason for it. Birbal narrated all that transpired between him and the Emperor.

Boy response was, “Is this what you are worrying about? I can give you answer for this but condition is you have to take me to emperor and let me meet him personally.”

Birbal agreed and next day took him to court and said, “My lord, Even this little boy can answer that question you asked me..!!”

Akbar said, “So, little boy show me God in this ring..”

Boy replied, “Sure. I will do that but before that can you ask for a glass of curd?? I am feeling thirsty.”

Akbar order to bring curd for boy. Boy took the glass of curd and started stir it and said, “I am used to drinking good curd which have butter in it but  I do not like this stuff which your bearer has brought and which does not yield butter at all.”

Boy replied, “Very well, then show me that this curd contains butter in it..”

Akbar laughed and replied, “Little boy, you don’t know that.. butter can be got out of curd only after churning it and yet you have the audacity to come here and show me God..!!”

“I am not fool. I just gave you the answer to your own question..”, replied little boy.

Seeing that Akbar was still puzzled.

Boy said, “Your majesty..!! In exactly same manner God is residing within everything. He is the power that maintains the Universe and yet one can not see him with one’s physical eyes.

A vision is only a projection of one’s own mind before the eye of the mind. One can realize God presence and see him with the eye of wisdom but for that one have to churn the five sheaths and objects and Separate the butter (Reality) from the Curd (Names and forms).”