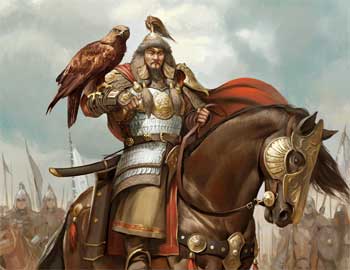 He knew that his falcon was much better than any arrow because it could fly into skies and see everything that a human being couldn’t.

Despite the group’s enthusiastic efforts, that day they found nothing.

Disappointed khan and his men returned to encampment. Genghis khan was frustrated because of this and In order not to take out his frustration on his companions, Genghis khan left the rest of party at camp and rode out alone with his falcon.


Genghis khan went out in forest and stayed in forest longer than expected and because of this became tired and thirsty.

It was summer time and all streams had dried up and he couldn’t find anything to drink there. Just then to his amazement, he saw a thread of water flowing from rocks just in front of him.

He removed falcon from his arm and took out a silver cup which he always carried with him. Then slowly he fill it with water, just a he was about to raise it to his lips, Falcon flew up and plucked cup from his hands and dashed it on ground.

Genghis khan was thirsty, this act of falcon made him furious but still falcon was his favorite so he thought that it might be thirsty that’s why did this.

He picked up hi cup again, cleaned of dirt and filled it again. When cup was only half filled, falcon attacked again, spilling water.

Genghis khan adored his bird but he knew that under any circumstance, he wouldn’t allow such disrespect as someone might be watching this scene from afar and later would tell other warriors that great conqueror Genghis khan was incapable of taming a mere bird.

This time, he drew his sword and then picked up cup again and refilled it, keeping an eye on stream and other on falcon.

As soon as he had enough water in cup and was ready to drink, falcon again took flight and flew towards him spilling water, just than with one thrust, Genghis khan pierced the bird’s breast.

Meanwhile, the thread of water had already dried up.

Genghis was thirsty and in order to find water, he climbed rock in search of spring from which that thread of water was coming.

To his surprise, there was pool of water and in middle of it was lying dead, one of most poisonous snake of that region. At that moment he realized that if he had drink that water, he would have died.

Filled with remorse, Khan returned to camp with dead falcon in his arms. He ordered a gold figurine of bird to be made, to always remember the lesson from this incident.

On Statue one wing, he had engraved: Even when a Friend does Something you don’t like, He continues to be your Friend.

On other wing, he had engraved: Any action committed in Anger is an Action doomed to Failure.

Anger Stories: Losing Everything in Moment of Anger