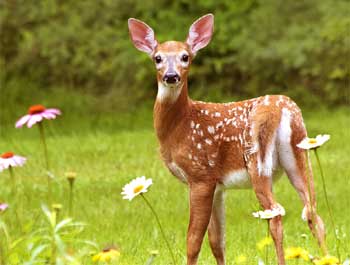 Once upon a time, There was a gardener who looked after King’s pleasure garden. Garden was beautiful and sometimes animals from near by forest would come to garden.

King had instructed gardener that if he sees any strange or rare animal in garden then he should at once inform King about it.

One day, gardener saw a strange kind of deer at far end of garden. As soon as that deer saw man, he ran like wind. Gardener understood that it was rare breed deer who were known as “Wind Deer” and were extremely timid and easily frightened by humans.

Gardener informed King about Wind-deer. King wanted to see that deer and asked gardener if he could catch that rare animal.


Gardener replied to King, “My Lord.. If you give me some Bee’s honey than i could even bring him into the palace..!!”

So King ordered that he must be given as much honey as he wanted.

Gardener knew that this particular deer loved to eat flowers and fruits in King’s garden. So, gardener started to let himself be seen by that deer little by little, so that deer would be less frightened.

Then he began to smear honey on grass where deer usually came to eat. Soon, deer began eating honey smeared grass. So, he developed craving for taste of this Honey-grass. This craving made him come to garden everyday. Before long he would eat nothing else..!

Little by little, gardener came closer and closer to deer. At first deer would run away but later he lost his fear and came to think the man was harmless.

As gardener became more and more friendly, eventually he got deer to eat honey-grass right out of his hand. Gardener continued this for sometime in order to build up confidence and trust.

Meanwhile, gardener had set up row of curtains, making a wide path from far end of garden pleasure to King’s palace. Curtains would keep deer from seeing any people that might scare him.

When all was prepared, gardener took a bag of grass and container of honey with him. When deer came, he began to feed deer by his hands. Slowly, he continued to lead him with honey grass through curtained pathway right into the palace.

Once inside, palace guards closed the doors and wind deer was trapped. Seeing so many people in palace, deer suddenly became frightened and began running around madly, trying to escape.

King came down to hall and saw panic stricken deer and said, “What a Wind deer!! How could he have gotten into such state? Ordinarily, if wind deer get even little bit frightened at particular place, he will not return to that place for rest of his life and will not return to a place where he has seen human for consecutive seven day.

But look!! Even such a shy wild creature can be enslaved by his cravings for taste of something sweet. Which lured it into palace.”

Not wishing any harm to deer, king had him released into forest. Deer never returned to pleasure garden and never missed taste of honey grass again.

Moral:
It’s Better to Eat to Live than to Live to Eat.