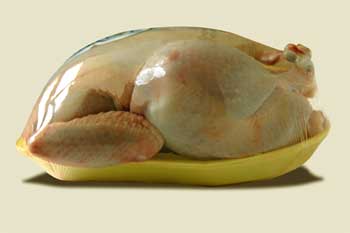 Once engineers at one of major aerospace company were testing the effects of bird strikes on the wind shield on various jets and airliners.

So to stimulate the effect of a bird striking a traveling plane at high speed engineers decided to make a powerful gun with which they could fire dead chicken (from freezer) at the wind shields.

After some test engineers declared that the test was very successful and the stimulation they used with gun and dead chicken worked very effectively.

Many articles and projects were published related to the suitability of wind shields and test done to approve that windshields were now suitable for planes.


At the same time in other part of world some other scientists were trying to assess same thing but on windshields of very new high train speeds.

These train test engineers had heard about the pioneering test developed by aerospace team, so they approached them and asked proper specifications of the test and way to conduct that test and the gun and dead bird.

Aerospace test engineers were happy to provide with all the details related to test done on wind shield.

Now train engineers were all set to build their own stimulation of bird striking high speed train But when tests were done results were shocking.

Wind shields that were supposed to be of high resistance to bird strike were smashed into pieces. In fact every single windshield they tired for testing was shattered along with the test booth itself.

Train engineers were horrified and concerned about the new high speed train safety and technology so they went to aerospace engineer with long report of failure of test and asked for advice and suggestions.

After reading the report a brief reply was sent from aerospace company test engineers and that was..

You Need to Defrost the Chickens First…

Moral:
Sometimes we work hard and focus on important thing but forget to notice small things that we over look because of pressure and work. So we need to sit and think for little and we can find solution.