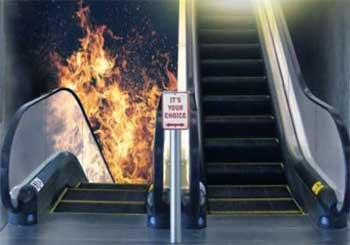 Once a very highly successful Human Resource Manager was killed in a tragic accident. His soul arrived at the Pearly gates where St. Paul received him.

St. said, “Before you settle in.. I want to tell you something.. We have never had a Human Resource Manager made it this far and now we are not really sure what to do with it.”

St. replied, “Well i would like to but we have order from higher authority that before allowing you to enter we should let you have a day in Hell and a day in Heaven and then you can chose for yourself where would you like to go for eternity.”


Manager said, “I would prefer heaven.”

“But before you decide you have to live a day in both places.”, said St. and in instant HR manager was sent to hell.

As doors opened in Hell he entered.

He saw a beautiful golf course, around were many fellows and friends. As they saw him all come to him and welcomed there. All played golf and enjoyed awesome dinner Then he got to meet Devil who was very nice and both spent time telling jokes and having fun together. Before HR knew it was time to leave. He said goodbyes and stepped into elevator which took him up in heaven.

Here St. was waiting for him and said, “Well now it’s time to spend a day in heaven.”

As doors opened in Heaven he entered.

He spent next hour moving around on cloud, playing harps and singing but it was not as enjoyable as his day in hell. As day ended HR was returned to St. and meet him at pearl gate again.

St. asked him, “Now tell me where would you like to go?? Hell or Heaven??”

Manager thought for a while and replied, “Well, Heaven is good but i had better time in hell. So, i chose Hell.”

So as per choice HR was sent to Hell.

HR was very happy to go, as doors of elevator opened. He found himself standing in an obsolete place covered in dirt and garbage. He even saw his friends and fellows in rags. All things were totally different now. In mean time Devil came to him and put his hands around him.

HR was shocked and stuttered,”I don’t understand.. Yesterday when i was here it was so much fun and now it’s just dirty and miserable.”

Devil looked at him and smiled, “Yesterday i was Recruiting you but today you are Staff…!!”