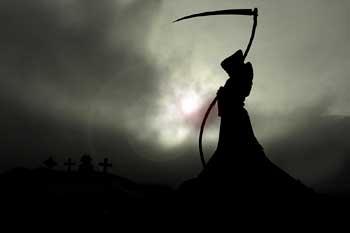 Once a king had a dream. In his dream he saw a dark shadow putting its hand on king’s shoulder. King was horrified to see that shadow.

Suddenly shadow spoke, “You don’t need to worry or be scared. Usually we come without informing but because you were a great king, I have just come here to inform you.”

King questioned, “But who are you??”

Shadow laughed and replied, “I am your death and be prepared.. Tomorrow as sun will be setting, I am going to come for you..”


This nightmare woke him up. Even after waking up and knowing that it was just a dream, king was trembling. He immediately called council of all his wise man and then told them about dream.

He asked them meaning of dream and ask if it is true?? Is death going to happen?? He thought astrologers might be able to figure it out.

All wise man discussed but none could come to conclusion. King became more and more confused, everyone saying different things. Situation was same from middle of night till morning.

There was a old man who used to serve king from his childhood and king almost respected him like his father.

King asked him, “Then what do you suggest?”

Old man replied, “According to my understanding let these wise men discuss, But you take your fastest horse and get away as far as possible from the palace as staying here will be dangerous for you for next 12 hours. After sun set you can come back but not before that..”

Old man continued, “If these man come to any conclusion i will come to you. The best way is towards Damascus, another capital of another kingdom. So I will know where to find you, to give you their conclusion.”

King was convinced and slipped quietly out of palace with best horse he had.

Whole day horse was running as fast as possible. King didn’t even stop for water or food. It was not time to think of food or water.

They reached Damascus, just outside city. They stopped under a tree.

King patted his horse and said, “You prove to be a great friend. You never ran so fast before, you understood my situation and ran hundred of miles away from palace.”

As sun was setting he immediately felt same hand on his shoulder as he felt in his dream. Shadow was there.

Shadow smiled and said, “I also should thank your horse. I was worried whether you would be able to reach this place at right time or not..

That’s why i came to inform you as this is the place destined for your death and your horse has bought you here on right time..”

Moral:
No one can Escape Death..

You May Also Like – How to get Rid of Fear of Death..?

One thought on “Dark Shadow Message to King.!”