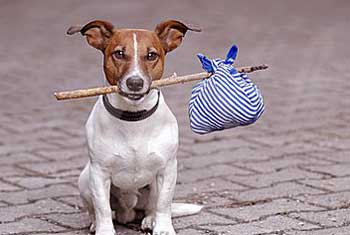 One night when a shopkeeper was just about to close his shop, a dog came to him into his shop.

Dog was holding a bag in his mouth. Dog moved toward shopkeeper to give that bag to him. Shopkeeper understood what dog was trying to do and took the bag. When shopkeeper opened the bag, saw a list of items and money in the bag.

Shopkeeper kept money and placed all the items in the bag written on list. Immediately dog picked up bag full of items and left. Shopkeeper was surprised to see the action of dog. He closed his shop and decided to follow dog to meet dog’s owner.

As shopkeeper was following dog he saw that first dog waited at the bus stop. Soon bus came and dog got into the bus. After that when conductor came, dog moved forward to show his neck belt. When conductor check it had money and address as well. Conductor took money and kept ticket in his neck belt.


When bus reached destination, dog started to wag his tail to indicate that he wanted to get down. Bus stopped and dog got down. Shopkeeper was still following that dog.

Shopkeeper saw that after walking some distance dog reached a house and knocked on door of that house with its legs. A person came out who was owner of dog. When dog owner saw dog, he started to beat it with stick very badly.

This shocked shopkeeper who was following dog. Shopkeeper went to dog owner and asked him, “Why are you beating the dog?”

Owner replied, “He disturbed my sleep. Instead it could have taken keys with him…!”

Moral:
There are no End to Expectations of people have from you. Just one Mistake done by you is Enough to forget all Good things done by You in Past. That’s Nature of this Material World.