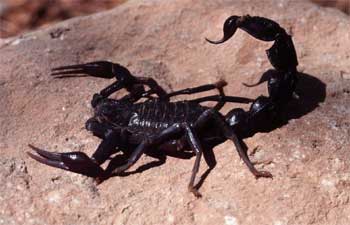 One day a scorpion looked at his surrounding of mountains and decided that he wanted to change. So, after few days he started his journey through forest and hills and vines. He kept going until he reached a river.

Scorpion saw that river was swift and wide. He couldn’t see anyway to cross that river. He analyzed all the sides and this made him think that he might have to turn back on his way.

Suddenly he saw a frog sitting in the bushes by the bank of the river. He decided to ask the frog for help to get him across the river.

Scorpion called to frog, “Hello Mr.Frog..! Would you be so kind to let me ride on your back so that i can go across river?”

“You can be sure of that… you see if i kill you, then i would die too as i cannot swim..” replied Scorpio.

Frog thought that this made sense but still he had doubts and again questioned, “What about when i get close to the bank to get you on my back… It’s possible that you would kill me and then get back to shore.!”

“That’s true.. that’s possible.. But then again i won’t be able to get across river, if i kill you.”, replied Scorpio.

Again frog thought for a while and questioned, “How do i know that if i get you to the other side and then u will not kill me?”

“Ah.. Once you have taken me to to her side. I would be so grateful to you then it wouldn’t be fair to kill you.. would it be?” replied Scorpio.

At last frog agreed to take the scorpion across the river. He went over to that side of bank and pick up Scorpio. Scorpio crawled over on to frog’s back.

Now, frog slide into river and started kicking strongly through the stream. Halfway across the river frog suddenly felt a sharp sting in his back and out of his corner of eyes, frog saw that Scorpio was removing his sting from the frog’s back.

Frog started to feel the numbness in his body and croaked, “You fool.. What have you done..! Now we both shall die.”

Scorpion shrugged on drowning frog’s back and said, “I could not help myself. It’s in my nature..”

And both sank into water of flowing stream.

Moral:
Sometimes We need to Understand that Nature of person can not change and should act Sensible.